Recently, Michael and I had the opportunity to visit one of Santa Fe’s wonderful gems, the School for Advanced Research (SAR).  This amazing organization, founded in 1907 with the donation of the White sisters compound and eight acres of surrounding land, began the important task of preserving and telling the story of the Native Americans.  The Indian Arts Research Center (IARC) houses two large, highly secure vaults reminiscent of bank vaults.  In those vaults, we were astounded at the priceless artifacts on row after row of shelves. 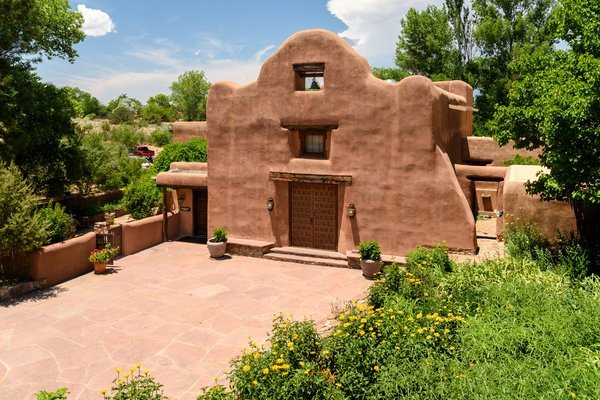 Should you visit Santa Fe, SAR should definitely be on your “must visit” list.  They offer tours of the Indian Arts Research Center and the vaults on Wednesdays and Fridays, and make sure you call in advance to get reservations.  The small group guided tours, led by knowledgeable docents, take a couple of hours (longer if you are lucky) and they allow visitors to gaze at the history of the American Southwest Native Americans.

We arrived on a Wednesday afternoon, and checked in with Daniel.  He graciously explained the background of SAR and the IARC, and welcomed the other few members of our tour group as they arrived.  The morning was splendid, so we spent a few minutes among the pines and absorbing the peace and tranquility of this lovely campus.  Located north of the Museum Hill area, the SAR campus is in the foothills of the Sangre de Cristo range, in some of the most beautiful areas of Santa Fe.

At the appointed time, we were welcomed again by our docent, Donna, who explained the role of IARC, gave tour members a secure location for backpacks, and cautioned everyone about not touching items or taking pictures in the vaults.  Everyone happily complied, so we began this two hour adventure.

The first step – walk through a huge vault door that any bank would be proud to claim, and on into the first vault.  We saw rows of sturdy shelving, fully loaded with pottery sorted by pueblo.  We learned that only Native Americans are allowed to have individual pieces of pottery carefully placed on the center work tables so they can learn from the potters who went before them, often seeing pieces of older family members several generations removed.  As we talked later with several of our artist friends, we learned that this experience is often quite moving, and inspiration seems to flow from each piece into the souls of these current artists.  I would almost relate it to my childhood experiences of walking the grounds of Breeds Hill and Bunker Hill in Massachusetts, hearing the echoes of struggle as our forefathers separated from the British monarchy.  This gives me a deeper understanding of the Pueblo Revolt in 1680, when Native Americans in the Southwest removed the Spanish rule from the Native American lands.

Among the pottery in the first vault, we saw historic pieces by some of the matriarchs of pottery – Lucy Lewis, Margaret Tafoya, Maria Martinez, and so many more.  But what I found fascinating, in addition to the historic matriarch pieces, were the interspersed pots (some quite large) that were hundreds of years old, and even some from current potters.  Michael and I had fun pointing to pieces that we knew were from the matriarchs and from our artist friends.  Donna was so welcoming of engaging the group in dialogue that it rapidly felt like we were touring with a group of friends.

A subsection of the first floor was a separate room (no entry, unfortunately, just looking through the doorway) contained a large collection of exquisite jewelry.  That room alone could have consumed hours of my time, and I know I would have been seized by the uncontrollable urge to try on many of the pieces.

Following that stop, we headed up a short flight of stairs to the second story of this vault, where we were treated to a huge collection of room-sized rugs.  Carefully stored in library-style pull-out carrels, the rugs represented styles and quality from all of the Southwest weavers, including the Navajo, Hopi, and pueblo weavers.  Along the inner perimeter of this floor, which had an open center looking down on the pottery below, there were displays of different types of artifacts.  We even saw a number of paintings on the walls, one of which had some signatures from many of our artist friends.

The second vault was astounding, with basketry from the different Southwest Native American peoples, including the Apache.  Donna was again patient and informative, showing us the many different techniques that were used by different tribes as they constructed these daily use and ceremonial items.  The centerpiece of the second vault, however, was an enormous pot in an alcove by Lonnie Vigil, another highly renowned potter from Nambe Pueblo.  Lonnie has created a number of significant pieces, particularly using the micaceous clay dug from the surrounding areas.

As part of its mission, SAR and IARC preserve the history of the Southwestern Native American peoples, but they are also integrally involved in working with current scholars and Native American artists to extend the story of these peoples to current times and beyond.  They conduct frequent seminars and lectures, and also have a number of field trips to historic locations like Chaco Canyon.  The organization is alive, vital, and continuing to expand its important work, and they accept memberships from those wishing to support the work of SAR.  As Michael and I talk more about relocating to Santa Fe, the draw of SAR becomes increasingly strong.  I can easily see myself immersed in the many activities of this organization, spending countless days absorbing as much as I can from this endless supply of cultural knowledge.  When you next visit Santa Fe, plan to visit SAR and IARC – it will be time very, very well spent.