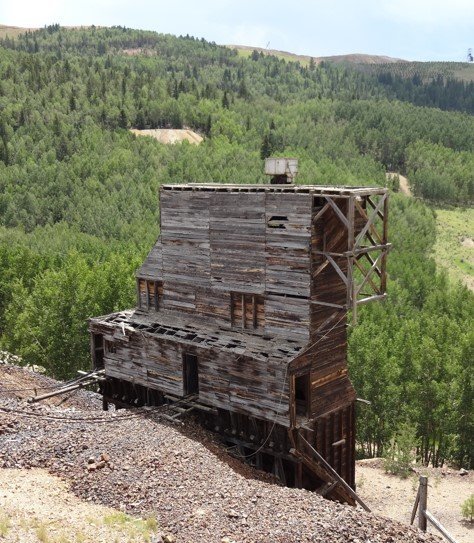 Mother Nature provides abundant bounty above the ground, nourishing us with food and drink, providing shelter, and creating natural splendors that cause me to gasp in awe.  Hidden below the surface, however, is another abundance of gifts.

From the earliest days, man has scratched below the surface to uncover the treasures below.  Sometimes it was substances to help man survive, such as coal.  Other times, it was metals and gems that were turned into tools and works of art.

My Native American friends who create amazing pieces of pottery go out into the hills and dig their raw clay, then go through a laborious process of cleaning and preparing the clay for their pottery.   Stacey Carr of Laguna pueblo has shared with me the time-consuming, back breaking digging – often with a screwdriver or small tool to get into the seams of clay captured by the surrounding rocks.

And Native Americans started thousands of years ago by digging precious stones out of the earth.  New Mexico, Colorado, and Arizona are studded with turquoise mines.  My friend Dayton Simmons, an expert gemologist, jeweler, and avowed rock-hound, digs at a couple of small mines that he owns, and I look forward to taking him up on his offer to dig my own turquoise one of these days.

Once the surface of the earth is peeled back, there are many minerals that we use in our everyday lives.  The massive copper mines in Arizona are one great example, with other precious and semi-precious metals all formed in clusters, pockets, and veins when the earth coalesced some 4.5 billion years ago.  Some areas, like South Africa and Arkansas, produce diamonds.  Other areas, like Italy, produce very high quality marble.  And of course, one must not forget man’s never-ending quest for gold.

In 1849, gold was discovered in the creeks of northern California, leading to the first major gold rush in North America.  It later migrated up to Alaska, and large amounts of gold continue to be produced in mines around the world.  But, as with all things, the easiest and most convenient sources were snatched up early, and today the process of mining for gold, diamonds, and other precious metals has become much more difficult and hazardous.

Recently, Michael and I had a chance to go down into a deep gold mine, the Molly Kathleen gold mine in Cripple Creek, Colorado.  We weren’t sure what we were getting into at first, and as Michael is slightly claustrophobic, it rapidly turned into a heart-pounding event for him, but educational for me.

The Molly Brown gold mine started back in the 1890’s, and has been shut down due to Federal mining regulations for the past 70 years.  It is the only deep vertical shaft mine in which the public can take tours, and if you ever get out to Colorado, just west of Colorado Springs, it is definitely worth your time.

The first thing we did was purchase our tickets – each tour starts out at a specific time.  We looked at their above-ground exhibits (and, of course, their gift shop loaded with nice jewelry), and girded ourselves for the experience.

The way to get into the mine is simple.  Get in an open sided elevator car and descend over 1,000 feet straight down!  That is roughly 100 stories of a building, and it is the only way in or out.  Once we got down, the guide greeted us and began our tour through the mine tunnels.

This mine was a high-producing location, so miners would follow a vein of gold with tunnels, ore cars to bring the raw ore up to the surface, and a separation of the gold from the surrounding rocks on the surface.  That far below the surface, miners had no light, so they were each issued a candle to put in their helmets so they could see what they were doing.  During the tour, the guide turned off the modern tunnel lights for a few minutes so we could see – absolutely nothing!  It was a total absence of light, even darker than the darkest night you have ever seen.  Often, more experienced miners would deliberately snuff out their candles, working in the dark and saving the candles for their wives in the miner camps.

Air and water were other concerns.  There is no fresh air below ground, so the mine had large pumps sending air down into the mines, and more large pumps taking leaky waters out of the mines so they didn’t fill and drown the miners.

There were accidents, as even the most careful miners would sometimes get caught in a tunnel collapse, often caused by dynamite explosions to break up the rock faster.  The work was grueling and fraught with danger, but men still went into the depths of the earth to pull out the rocks they sought.  Finally, around 1960, new government regulations made it more economically sensible to close the mine and cease mining instead of upgrading to the new safety requirements.

Toward the end of the tour, we all got to ride in a small air-powered miner’s transportation cart, and we all got to pick a gold-bearing rock out of an underground cart as a souvenir.  Then we headed back to the surface, gaining a new appreciation of the hardy men who ventured down into the earth.  Since then, I have never looked at gold, silver, or precious gems in quite the same way, and I have gained a much greater appreciation of the efforts that artists go through to create their art.

Yes, some artists purchase raw stones for their jewelry, and other artists purchase gold and silver ingots to carve, pour, and mold, but this does nothing to diminish the creativity and expression of the finished works of art.  Each piece is hand=crafted, not machined on an assembly line, and each piece comes from Mother Earth and has in it a piece of the artist’s soul.