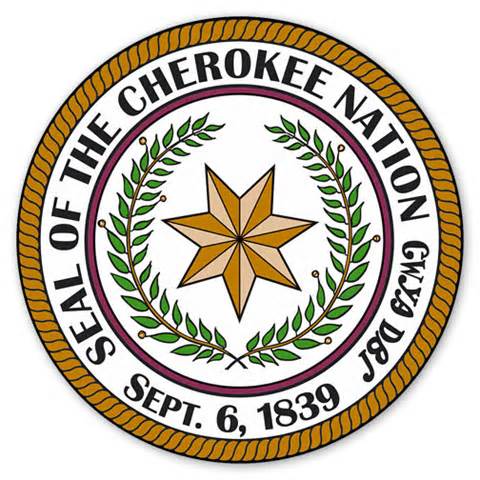 The word Cherokee (pronounced CHAIR-uh-kee), comes from a Muskogee word meaning ‘speakers of another language.’  Cherokee Indians originally called themselves Aniyunwiya, “the principal people,” but today they accept the name Cherokee, which is spelled and pronounced Tsalagi in their own language.

The Cherokees are original residents of the American southeast region, particularly Georgia, North and South Carolina, Virginia, Kentucky, and Tennessee. Most Cherokees were forced to move to Oklahoma in the 1800’s along the Trail of Tears and their descendants still live in Oklahoma today. Some Cherokees escaped the Trail of Tears by hiding in the Appalachian hills or taking shelter with sympathetic white neighbors. The descendants of these people live scattered throughout the original Cherokee Indian homelands.

Trail of Tears was the Cherokee name for what the Americans called Indian Removal. During the 1800’s, the US government created an “Indian Territory” in Oklahoma and sent all the eastern Native American tribes to live there. The Cherokee tribe was one of the largest eastern tribes, and they didn’t want to leave their homeland. Some tribes willingly agreed to this plan; other tribes didn’t want to go, and found themselves forced by the American Army to make the long walk. The Cherokees were peaceful allies of the Americans, so they asked the Supreme Court for help. The judges decided the Cherokee Indians could stay in their homes.  President Andrew Jackson sent the army to march the Cherokees to Oklahoma anyway. They weren’t prepared for the journey, and it was winter time. Thousands of Cherokee and other Indians died on the Trail of Tears. It was a terrible time in history.

There are three federally recognized Cherokee tribes: the Cherokee Nation of Oklahoma, the United Keetoowah Band in Oklahoma, and the Eastern Band of Cherokee Indians in North Carolina. Other Cherokee communities in Alabama, Georgia, and other states are considered unofficial by the US government. The Eastern Cherokee people live on a reservation. Indian reservations are lands that belong to Native American tribes and are under their control. The Oklahoma Cherokee people live on trust land, though many Cherokees call it a reservation anyway. The Keetowah Cherokee do not have a land base. Each Cherokee tribe has its own government, laws, police, and services, just like a small country. However, Cherokee Indians are also US citizens and must obey American law.  In the past, each Cherokee band was led by one war chief and one peace chief. Cherokee chiefs were chosen by a tribal council. Cherokee war chiefs were male, but the peace chief could be a woman. Today, Cherokee tribal councils and chiefs can be either gender and are popularly elected, like senators and governors.

Like their distant cousins the Iroquois, the Cherokee Indians had an even division of power between men and women. Cherokee men were in charge of hunting, war, and diplomacy. Cherokee women were in charge of farming, property, and family. Men made political decisions for the tribe, and women made social decisions for the clans. Chiefs were men, and landowners were women. Both genders took part in storytelling, artwork and music, and traditional medicine.

The Cherokee language has an innovative writing system that was invented by the Cherokee scholar Sequoyah. Sequoyah’s writing system is a syllabary. That means one character represents each syllable. (Another language that uses a syllabary today is Japanese. Today, many Cherokee people use a modified English alphabet instead of the syllabary Sequoyah invented, because it is easier to type.

Traditional Cherokee art included pipe carving, rivercane baskets, gourd art, and pottery. After moving to Oklahoma, the Cherokees couldn’t get the materials they used to use for traditional crafts, so they concentrated on other crafts like American Indian beading and textile arts.

The Cherokee Indians traded regularly with other southeastern Native Americans, who especially liked to make trades for high-quality Cherokee pipes and pottery. The Cherokees often fought with their neighbors the Creeks, Chickasaws, and Shawnees, but other times, they were friends and allies of those tribes.