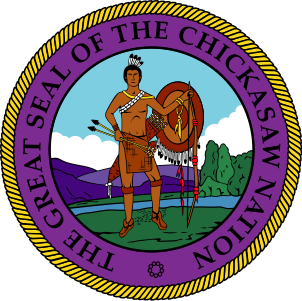 Chickasaw (pronounced “CHICK-a-saw) comes from their tribal name, Chikasha, which was the name of a legendary Chickasaw leader.  The Chickasaws are original people of the American southeast, particularly Mississippi, Alabama, Tennessee, Kentucky and Missouri. Most Chickasaws were forced to move to Oklahoma in the 1800’s, and their descendants live in Oklahoma today. Some Chickasaws escaped by hiding or pretending to be white, and the descendants of these people are still living in the original Chickasaw homelands.

The Chickasaw tribe has its own government, laws, police, and services, just like a small country. However, the Chickasaws are also US citizens and must obey American law. In the past, the Chickasaw tribe was ruled by a council of hereditary clan chiefs, led by a minko, or war chief, who made military and political decisions for the whole tribe. Today, the Chickasaw councilmembers and governor are popularly elected.

Chickasaw men were hunters and sometimes went to war to protect their families. Chickasaw women were farmers and also did most of the child care and cooking. Both genders could succeed at storytelling, artwork and music, and traditional medicine. In the past, Chickasaw chiefs were always men, but today a tribal chief may be either gender.

The Chickasaw Indians were farming people. Chickasaw women did most of the farming, harvesting crops of corn, beans, squash, and sunflowers. They also gathered wild plants such as nuts, berries, plums, and herbs. Chickasaw men did most of the hunting, shooting deer, wild turkeys, and small game and fishing in the rivers and along the coast. Chickasaw dishes included cornbread, soups, and stews cooked on stone hearths. The Chickasaws also enjoyed sassafras tea.

The Chickasaws traded regularly with all the other Southeast Native Americans. These tribes communicated using a simplified trade language called Mobilian Trade Jargon. The most important Chickasaw neighbors were the Choctaws. Long in the past, the Choctaws and Chickasaws used to be the same tribe, but then they split. After that, the two tribes sometimes fought each other, and other times were allies.

Although the Chickasaw are considered a member of the “Five Civilized Tribes” (Creek, Choctaw, Cherokee, Seminole, and Chickasaw), these five tribes were never part of an alliance together, and they did not call themselves the Civilized Tribes in their own languages. Originally, the white settlers probably called them this because these five tribes were early converts to Christianity. They were also farmers who lived in settled towns under sophisticated government systems, which Europeans and early Americans considered a higher level of civilization than independent bands of hunters who moved from place to place. However, there were dozens of other Native American tribes who also led farming lifestyles, not just these five.