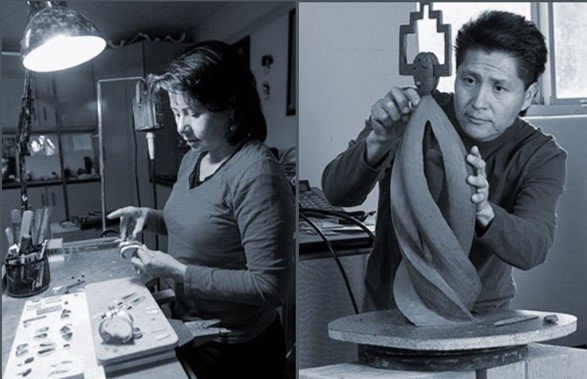 On a recent weekend, our friends Harry and Elaine flew in from London for a visit to the American Southwest.  We joined them in Albuquerque for a fun-filled weekend.  At the end of the weekend, we were all tired, but also pleasantly satisfied with the variety and quality of adventures we were able to have in Albuquerque.

On a drizzly Sunday morning, we started with a trip to Placitas to visit the artistic couple of Althea and Joe Cajero.  Althea makes the most exquisite cuffs, pendants, earrings, and other fashion accessories, and I had previously talked with her about some of her most recent creations.  We had intended to pick up a couple of cuffs and then head to our next destination.

When we arrived at their beautiful home, we were immediately taken with the incredible view of the northern face of the Sandia mountains, soaring to over 10,000 feet in height.  As the small, sleepy community of Placitas is just above 5,000 feet, this created a sharp, wonderful contrast.  As we arrived at their home, the rain stopped and we exited the car to a fresh, mountain air breeze.  I immediately stopped, faced the Sandia peaks, and gave thanks for such a glorious sight.

Althea showed us her jewelry, and in addition to picking up the two cuffs, I also asked her to make me some pendants and earrings.  We sat and chatted about stones and designs for a bit.  I was particularly taken with Althea’s cuttlefish design and her use of Tahitian black pearls as accent stones.  Of course, those were the ones that immediately went into The Dancing Rabbit Gallery’s inventory.

While we did that, Joe took Michael and Harry into his part of the studio, where he makes bronzes.  Joe enjoys making figurals, but also more contemporary takes on telling cultural stories.

Joe makes his bronzes by starting with a carefully, meticulously crafted clay model.  Only when he is satisfied with the clay model does he send it to the foundry to pour and texture each bronze.  After a limited number are poured, typically one at a time for a show or a specific customer, the molds are destroyed.  One almost ready to go to the foundry is a male and female pair, bending toward each other in a linked arch, with different meanings for the front and back of the piece.  Another, just coming out of production, is a stunning wild buffalo to which Michael and Harry were both quite attracted.

Joe spent quite a bit of time telling us the story of his most stunning pieces, and the intricate meanings with each symbol and feature.  The connection of the art to the culture and values of Joe’s Jemez pueblo were clearly described.

As we became more comfortable with each other, stories began to emerge and connections were established.  I mentioned that we had several bronze sculptures from Kim Obrzut and Upton Greyshoes Ethelbah, and Joe’s reaction was quite warm.  He and Kim use the same foundry to pour their pieces.  Both Joe and Kim formerly used the same foundry that Upton (Uppie) uses, and they were even having Uppie over for dinner that evening.  As an example of how warm and open Joe and Althea were, they immediately invited the four of us to join them for dinner as well, but we had another engagement and couldn’t stay.  We even learned later that afternoon that Joe had gone to elementary school with another Jemez potter, Dominique Toya, and went to IAIA as a 2-D painter in the same painting classes as Erik Fender.  It truly is a small, connected world.

Joe did mention that one of his pieces had been commissioned in larger than life size (9 feet tall on a 3 foot base) for the Hotel Chaco in their main lobby, so we went to see that next.  It is a spectacular statement piece, and we smiled happily as guests arrived while we were there, knowing the particulars of the story.

It was a wonderful way to get to know a couple of artists and take a peek behind the scenes.  So often we see their works in galleries and at shows, but we don’t get to hear the stories behind their art as clearly described as when we visit them in their studios.  Harry and Elaine got to experience a part of my gallery owner experience that most people don’t get, and I really think they enjoyed themselves quite a bit.  Needless to say, Michael and I also enjoyed ourselves and we learned quite a bit as well.