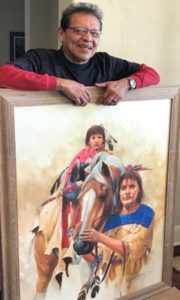 I have always been a big fan of Gary Montgomery’s painting.  My mother purchased an artist proof of Greeting the Great Herds back in the 1980’s, and it has been lovingly cared for in my Gallery.  Situated right behind my desk, right above a Kelly Haney work, Seminole Cowboy, these two pieces always seem to take me back in time to a different period, to a different lifestyle.

It was with great pleasure that Michael and I ran across Gary at Cherokee Art Market in Tulsa a few years ago, and we had a chance to introduce ourselves and exchange contact information.  And, as it always seems to happen, time passed and our paths didn’t cross for too long a time.  We saw him again briefly at Red Earth in Oklahoma City last June, and touched base again.  Imagine my surprise when we got a call from Gary last week, letting us know that he would be in the Dallas area for a few days on family business.  We immediately coordinated a time for him to come over and visit.  He had posted on Facebook a few photos of some recent oils he had completed, and as we were interested in adding a piece or two to our fine art section of the Gallery, he offered to bring them by as well.

Gary had an interesting story of growing up, learning to paint as a very young boy from his uncle, who was also a painter.  He began a lifelong journey in paint at the age of six, and in 1983 was recognized as a Master Artist by the Five Civilized Tribes Museum in Muskogee, Oklahoma.  Over the years, Oklahoma has produced a number of very talented Native American artists of all mediums, and Gary has risen to the very top of this group.

But his career might have taken a slightly different turn but for a couple of unfortunate incidents.  Gary was an avid baseball player, and was a highly regarded high school pitcher – up until the day he broke his arm.  A pitcher with a swift fastball, Gary completed his college playing days at Eastern Central University in Oklahoma, and tried out for a minor league team in El Paso.  But loose bone fragments in his elbow caused intermittent nerve problems, so he switched to a full time career as a painter and a father.

He married Linda and raised three sons.  Later, his niece came to live with them.  Linda had a full career teaching young Native Americans at a local school, and recently retired.  And Gary’s career as a painter blossomed.

Gary was a prolific painter early in his career, particularly with the high level of interest in Native American art in the late 1970’s and early 1980’s.  He tried different types of paint, but always came back to oils because he felt they gave a more realistic and soft tone to his work.  A “Romantic Realist,” Gary’s works tend to focus on the people who make up the Seminole culture.  Their expressions as they go through life are carefully rendered, as each piece of his art tells a different part of the Seminole story.  As a perfectionist, Gary is never really satisfied with his works – always striving to tweak a small detail to make the picture even more evocative.  To me, that is the hallmark of a brilliant and dedicated artist – someone who is paying painstaking attention to his or her craft and wants to make sure that even the smallest pieces are in harmony.

When Gary came over that morning, he brought a number of pieces of varying sizes and price points.  It would have been so easy to take them all, but as a small Gallery that doesn’t do consignment work, we have to be mindful of our small hoard of pennies.  So we acquired three amazing originals, and will have them available in the near future on our website and featured in our upcoming book on Fine Art.

After chatting and admiring Gary’s work, we headed over to the Lancaster Art Center to show Gary the Dancing Rabbit exhibit that is up during January and February, showcasing his Greeting the Great Herds piece.  We then headed to a local favorite, Tolbert’s, for some comfort food and a warm beverage.  Sadly, Gary had to head back to Oklahoma in the afternoon, as domestic chores and pets called.  But we formed a much deeper relationship in the few hours we had to spend that morning, and Michael and I both enjoyed our morning visit with Gary.