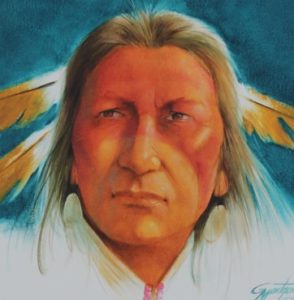 Around the United States, there is an emerging movement to celebrate the second Monday in October as Indigenous Peoples Day. It was started in South Dakota in 1998, reflecting to some degree the increasing Native American activism that has taken place over the past fifty years. Since then, a long list of cities, counties, and even States have adopted this date either as a complement to the Federally recognized Columbus Day holiday or as an alternative to that holiday. The intent is to present the other side of the story of European incursion into North America. As such, it has become somewhat politicized. However, for most people in this country, it is just a long weekend to be enjoyed, regardless of its name.

I like to think of Indigenous Peoples Day as a celebration of the many colorful and vibrant cultures represented by Native Americans. It is an opportunity to recognize a vital segment of our population, descendants of the First Americans who came to this continent tens of thousands of years ago.

Many elementary school books present a fairly sterile, homogeneous look at Native Americans. But in the 15th century, there were thousands of unique tribes living in harmony with Mother Earth on this continent. The wide range of geographic conditions, ranging from the frigid north to the sun-baked southwest, produced different lifestyles oriented around similar but different belief systems.

While I make no claim to understand these belief systems to a deep degree, I do know that many of their stories and traditions are handed down from generation to generation orally or in dance. The rituals help to preserve and transmit the beliefs, and form the center of many Native American tribal societies.

When Christopher Columbus first stepped ashore in North America in 1492, he entered a land that had complex societies and large trading networks. In the ninth century, for example, the Anasazi and the Caddo had huge nations, one centered around Arizona and New Mexico and the other centered around Texas and Oklahoma. Both nations traded extensively with each other, and there is archaeological evidence that they traded with other tribes as far away as South America.

Being tied to the land, Native Americans had a strong appreciation of the seasons and stellar movements in the night sky. The layout of the Chaco Canyon complex in New Mexico, for example, shows a deep understanding of the summer and winter solstice, integrating these understandings into their religion and culture.

Native Americans also appreciated the bounty of the land around them. When an animal was harvested for food, prayers were offered in thanks for the sacrifice of the animal so that the tribe could survive. Every part of the animal was used in some way, without wasting the sacrifice. The same was true of using flora for dwellings and agriculture. I am always taken by the Navajo ritual of facing the east (the rising sun) at dawn and offering blessings for the day. Even the hogans are built with that solar orientation in mind.

The more that I learn about the different Native American cultures that existed in North America back before Columbus came, the more I realize that there were many sophisticated, complex communities living on this continent. It is not what the school books tend to portray, but I am hopeful that as Indigenous Peoples Day takes root, that our understanding and appreciation of these cultures will grow.

As inevitably happens when two disparate cultures collide, the European incursion caused irreparable damage to almost all of the indigenous peoples of North America. While that damage can never be undone or rescinded, we can at least acknowledge and celebrate those cultures. They are a key part of the tapestry of the history of this continent and the people now living here, and we are far richer as a nation because of their contributions. Ignoring or dismissing Native Americans would cause a large gap in our cultural tapestry, and the loss would be very sad indeed.

So this coming Indigenous Peoples Day, consider joining or observing a celebration near you. At the very minimum, as you are enjoying a long weekend holiday, think for a minute about the Native American peoples in your area, and celebrate them as part of our family, the American family.