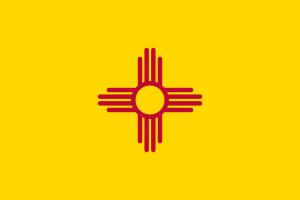 The State of New Mexico has a somewhat unusual State flag, in that it consists solely of a yellow background with the Zia sun symbol on it. I can’t think of another State that has only a single Native American symbol adorning its flag.

The history of this symbol goes back many thousands of years, and is found in many petroglyphs throughout the region. In the mid-1200s, the Zia people migrated from the Four Corners region (where Arizona, New Mexico, Utah, and Colorado all meet) to their current pueblo location around the Sierra Nacimiento mountain range and the San Pedro river valley. From the Zia website, the Zia peoples believe they are descended from the Ancestral Puebloans (the Anasazi) as part of the big migration.

The striking yet elegantly simple Zia Sun Symbol is representative of many aspects of Zia culture. The four cardinal directions of the compass, which appear in many Native American cultures, are identified. The four seasons of the year, critically important for a peaceful agrarian culture, are also included. The third aspect includes the manner in which the Zia people divide the parts of the day – the morning, mid-day, early evening, and nighttime. And finally, on a very individual level, the fourth aspect represents the Zia interpretation of the four stages of a person’s life – early childhood, youth, middle age, and senior citizen status. 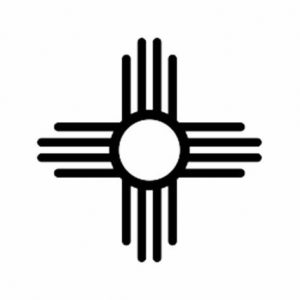 The Zia culture, similar to many other Native American cultures, hold four values high in their estimation. These are the need to develop a strong mind, a strong body, a pure spirit, and a helping and cooperative spirit among their pueblo members.

The State of New Mexico attained statehood in 1912 (the 47th State in the United States). But for the first 14 years of statehood, the State had no official State flag. In the early 1920’s a contest was held by the State of New Mexico to solicit designs for their new State flag, and a Santa Fe resident by the name of Dr. Harry Mera entered the Zia symbol – a red Zia Sun symbol on a bright yellow background, mimicking the colors of the Mexico flag. At the time, the Zia pueblo residents had no say in the matter, as they were not yet eligible to vote, so this symbol was misappropriated without their consent and without any compensation by the State of New Mexico for its new State flag.

Dr. Mera, an anthropologist, was inspired by a piece of pottery in the Laboratory of Anthropology museum in Santa Fe, where he was the curator following his service as a doctor in World War I. It turns out the pottery he saw with the Zia sun symbol was actually stolen from the Zia people by another anthropologist, James Stevenson, back in 1890 and placed in the museum. Stevenson even wrote about his theft in a later book. The stolen pot has since been returned to the Zia people. Today we know this Laboratory of Anthropology museum by its current name, the Museum of Indian Arts and Culture.

For his contest winning entry, Dr. Mera and his wife were awarded the princely sum of $25, which today would be roughly $350.

Fast forwarding to 2001, the North American Vexillological Association (NAVA, the largest organization of flag scholars and enthusiasts in the world) held a contest among their global members to determine which State and Canadian Province flag was the best. The NAVA website states that over 29,000 votes were cast, coming from NAVA members and the general public from around the world. NAVA uses the five design principles found on their website (nava.org) of keeping the flag simple, using meaningful symbolism, using 2 or 3 basic colors, not using any lettering or seals, and being distinctive from other flags. The State of New Mexico was selected by the membership as having the BEST State flag, followed closely by the State of Texas and the Canadian province of Quebec.

The Zia Sun Symbol can be seen throughout New Mexico, adorning products such as clothing and decoration, promotional materials for tourists, State publications, tattoos, and many other items. However, the Zia people have requested that their Zia Sun Symbol not be used on beer cans or football helmets, and that proper respect be given when the symbol is used. In fact, anyone who does want to use the Zia Sun Symbol for any purpose should first contact the Zia Pueblo administration for permission, as it is owned by the Zia Pueblo. 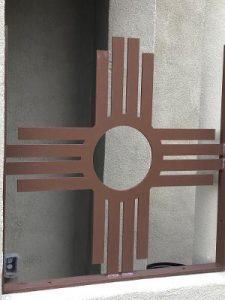 Yes, I did so for the purposes of this blog, and the Zia people with which I chatted were very friendly and accommodating. We are so taken with the strength and meaning behind the Zia Sun Symbol, we even commissioned a metal worker in Santa Fe to create an iron Zia Sun Symbol for the entrance of our new home.

The next time you see the Zia Sun Symbol, think for a minute of the rich history and culture of the Native American peoples of the American Southwest, stretching back over 10,000 years. Think of the meaning of this powerful Sun Symbol, and how it gives us such a deep look into the culture and values of the Zia people. It is far more than just something created by an advertising agency – it is a statement of how the Zia people live their lives.