The Navajo Nation covers a huge territory of over 27,000 square miles in Arizona, New Mexico, and Utah.  Remnants of the old trading culture still linger, such as Hubbell’s Trading Post in Ganado, AZ and Toadlena Trading Post just outside of Newcomb, NM.  Outposts such as these were set up for the convenience of the people who live in the area – not for tourists who must find a way to drive beyond the end of the road and around the next corner. If one is adventurous and patient, the drive is well worth it! 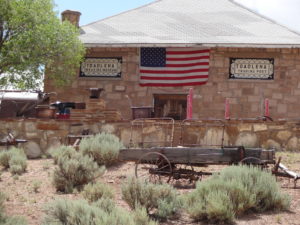 I had the opportunity to stop by the Toadlena recently, and spent a couple of hours marveling over the assortment of Navajo rugs that they had in the store, as well as wandering through the museum area. Two Grey Hills, Ganado, Chinle, and many other parts of the Navajo Nation were well represented, with many weavings from master weavers.

Mark Winter is the owner of the Toadlena Trading Post, and my only disappointment that day was that he wasn’t there.  As he is the author of one of the seminal works on Navajo textiles, it would have been really nice to chat with him for a bit.  However, Thelma filled in nicely with her expert opinions and handy reference materials.  I have several rugs, some going back to the 1930’s and 1940’s, and I was on a quest to learn more about them, as well as, a few others for which I had little information.

While I was there, I couldn’t resist the opportunity to get another Two Grey Hills rug, partly because of the beautiful patterns and partly because of the very tight weave which makes these rugs so strong and light.  At the same time, I got a copy of Mark’s newest reference book, and Thelma put it aside to have Mark sign it for me before she shipped it to me.