One vacation I remember was to Rocky Mountain National Park.  As a side trip we went to a trading post, and all I remember was Mother’s excitement of getting there. 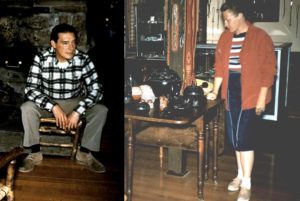 I was pretty young, so I don’t recall much of the trip with exception of the “really cool stuff” that was there. As instructed by my folks, I had my hands in the pockets of my jeans. “I could look with my eyes, not my hands,” they told me. (I think my poor sisters were in charge of keeping me out of trouble during our visit – I’m sure that was a full time job.)

As time passed, there was an elderly man in a rocking chair talking and visiting with those who had entered the post. While pestering my father to purchase me something, and he trying to explain that the “really cool stuff” wasn’t for little boys; he motioned to Mom and escorted me toward the elderly man.  As I was introduced to “Charlie Eagle-Plume”, his voice and gentle manner of speaking mesmerized me.

He spoke of things that he had done as a little boy and how poor he was. After a time he asked, “what do you think is the most important thing that you can have is?”

He leaned forward, and gently took my hand (at this time I’m sure I was spell bound) and whispered “Love is the most important thing you can have…”

He then took out a box full of arrow heads and allowed me to choose one. I put my new treasure in my pocket and cherished it for years. Although through the years I lost the arrow head, the truth remains today. Love is much better than the “real cool stuff”.  Seems today we could use a lot more love for one another, and a little less of the cool stuff…