During World War II, the United States was locked in a bitter struggle with the Japanese Empire on islands throughout the South Pacific.  The Marines recruited a group of 29 Navajo (Dine) men to create a code language for artillery direction, and then to implement the language on the very dangerous front lines facing fanatical Japanese soldiers.  A number of books and even Hollywood movies have been created about this group, called the Code Talkers. 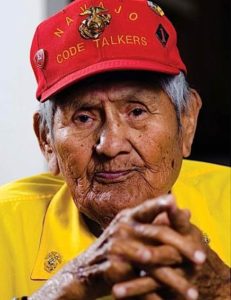 One year ago, my wife and I went to Albuquerque for the first weekend of the Balloon Fiesta and to visit some of our gallery friends in Albuquerque.  While there, we stopped at the Indian Pueblo Cultural Center to see some of their exhibits and visit their gift shop manager, Ira.  Of course, Katie couldn’t resist getting a nice Ganado Red rug and a lovely necklace.

But the highlight of the trip for me was quite a surprise.  There was a poster outside the gift shop that Chester Nez, the last living member of that original group of Code Talkers, would be signing copies of his new book, appropriately titled Code Talkers, that afternoon.  We had a couple of hours to wait, so we went into the adjoining restaurant where my anticipation built and built.

Finally, it was time.  I got my book from Ira, and took it over to Chester at his table.  At 93, Chester was frail but still had a knowing gleam in his eye.  I asked him to please sign my book, and he did so.  Then, I used the only word of Navajo that I know, Ahééheeʼ, three times.

The first time, I said Ahééheeʼ for his service during the War, saving countless thousands of American lives with your courage and dedication.

The second time, I said Ahééheeʼ for his being such a wonderful role model to young Navajo men who can struggle with the challenges presented by reservation life. 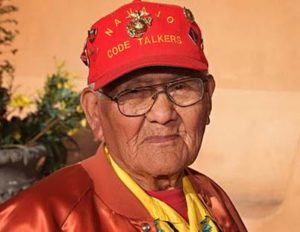 The third time, I said Ahééheeʼ for being a personal inspiration to me.  As a young boy, I read volumes on the Second World War, as did most young boys of my generation.  The values that I took from those volumes included honor, hard work, trust, teamwork, courage, perseverance, and many others.  Though he didn’t know it at the time, Chester Nez and his generation sacrificed to give me liberty and freedom.  They formed my character, though sometimes that formation took extra work to round off some of my stubborn rough edges.

I carried his book home with me, and to this day it remains on my nightstand, one of my treasured possessions.  It is much more than just a book to me; it is a daily inspiration.

Eight months after I had my brief talk with Chester, I learned that he had passed away at the age of 93.  I sat in my office, read his obituary, said some quiet prayers for Chester and his family, and shed some tears.  I am so blessed that Katie and I just happened to be in Albuquerque that first weekend in October, and that Chester was signing books.  This year, as the Balloon Fiesta draws near, Chester won’t physically be there.  But I have his book, signed by his hand, and I have the treasured memories of a very brief conversation with Chester.  His spirit will always be with me, and I will try very hard to pass along his inspiration to my children and grandchildren.  For that is how we grow as humans, seeing the best in people and trying to include those aspects in our own lives.

So, Chester Nez, once again I say Ahééheeʼ for being the man you were.  Yes, the one word I know in Navajo means thank you.