Acoma Pueblo is also known as Sky City.  And it is just that- a pueblo located atop a very tall mesa; historically, the pueblo was easily defended, because there were only a few secretive paths up to the top.  Once on top of the mesa, the view in all directions is breathtaking. Michael and I enjoyed wonderful a visit to the pueblo this past summer. 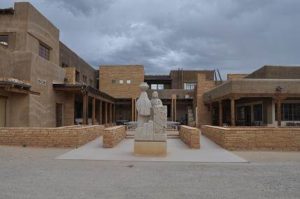 When we arrived at Acoma, the first thing we did was to stop at the new Visitor Center at the bottom of the mesa.  It has a breath-taking exhibit of Acoma pottery and paintings, as well as educational films—and a very nice gift shop.

The Visitor Center is where we registered for the Acoma pueblo tour, and shortly after we did so, we had the opportunity to climb in the little bus and head up to the top.  It is so much easier than the 370 or so stairs (cut into the living stone) that I had to endure as a little girl and young adult those many decades ago.  The first road was a dirt road, constructed in the 1940’s for a Hollywood movie; that road was improved and paved in the 1970’s for another Hollywood movie.  Even better, the Hollywood movie producers not only paid for the roadwork, but also used a number of Acoma residents in the movies!

Living conditions can be harsh on Acoma- water must be carried to the top of the mesa, though the practical Acoma residents have large catch cisterns for rain.  There is no electricity on the mesa, so residents use either traditional means or propane gas for their limited power needs. Although there are only a few dozen people who live on the mesa year round, they consider it quite an honor to continue to live as their ancestors.

As we walked on the tour, we visited with several of the local residents and vendors atop the mesa and made several new friends. The people of Acoma make the most beautiful white-slipped pottery from clay that is gathered around the mesa. I find it most interesting that shards from old pots are ground with the clay to form new pots and it is this combining of the old with the new that provides the clay that is uniquely from Acoma. We thoroughly enjoyed our time at Sky City and have plans to return soon to make more new friends. Through the years I have been fortunate to collect a number of beautiful pieces from Acoma, many of which are currently in the Gallery.