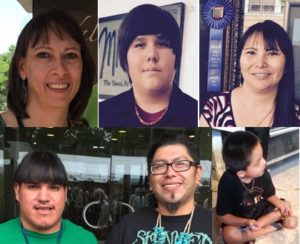 Every year, the entrants are a combination of established artists and emerging artists.  Some of the established ones either retire or decide not to participate anymore, but the lifeblood of Indian Market is replenished with the new artists.  It is always exciting to see our old friends, but also quite exciting to stop in and see some of the newer faces and get to know their stories as well.

This year, we had a chance to meet some new artists (a couple we had met previously, but they were fairly new to Indian Market).  A Cherokee potter, Karin Walkingstick (www.walkingstickpottery.com), caught our eye as we wandered through Market on the first morning.  Karin was bubbling with excitement as we chatted on that crisp August morning, as she has entered Indian Market for the first time, and come away with a highly sought award ribbon for her entered pot.  What makes this even more astounding is that Karin, though she has been working in different artistic media for many years, had only embraced pottery a couple of years ago.  Her talent in making contemporary pottery is evident, as she has earned a number of awards in the past couple of years.  Yet Karin remains humble about her craft and talent, deflecting attention away from herself and toward the pottery.

Another artist who was entering Indian Market for the first time was Debbie Lujan of Taos Pueblo.  Debbie is a remarkable photographer, and she captures life at the Taos Pueblo with an amazing eye for composition and colors.  Her lens tells many stories about the Taos Pueblo, including capturing for posterity some of the structures which are no longer there.  All of her photos are shot with natural lighting, and there is no post-production altering of colors or shapes.  What you see in her photos are incredibly beautiful vistas and icons of pueblo life.  Debbie also won a ribbon at Indian Market, and we are so pleased to have several of her beautiful pieces in our Gallery.  You can also see more about Debbie on her Facebook page, facebook.com/whiteflowerphotography.

Artistic talent may come from a source deep inside the soul, but it helps to have talented family members to teach and guide young artists.  We had a chance to talk with an established and quite talented potter and silversmith, Erik Fender, and saw an item that his grandson Talyn (who is just 5) had done just prior to Indian Market.  In fact, it was Talyn’s first ever piece, which proud grandfather had captured on Facebook, so we were able to acquire a piece of future history – the emergence of what will surely be another talented member of the Fender family. We were also able to purchase a piece by Erik’s son, Ian. Ian is also developing his pottery skills quite nicely.

Oh, and did we mention that Erik earned a first place ribbon (of course) and an honorable mention ribbon, and his mother, Martha Appleleaf, and his son, Ian, also won second place ribbons.   The talent runs deep in this family.  And yes, we happily have a number of their works in the Gallery you can see.

Finally, a pair of potters who we had met at a prior show were also at Indian Market, and of course we had to stop by and collect a pot they had made for us, as well as chat a bit.  Bobby Silas of Hopi and Tim Edaakie of Zuni have teamed up for a number of years to recreate the ancient and traditional design in their stunning pottery.  We saw Tim and Bobby earlier this year at the Zuni show in Flagstaff, but we were overloaded and couldn’t carry another pot home with us.  So we asked them to hold it for us, so we could pick it up at Indian Market.  Being the perfectionists that they both are, they decided to create a whole new pot for us, fixing a couple of the almost impossible to see blemishes on the first pot.  Bobby makes the pots, and Tim does the painting, and this collaboration has won awards at Indian Market and at other venues. Both very talented in their own right, this teamwork often produces art that is greater than the sum of the parts.  We are so happy to have several pieces of their work in our Gallery.

So when you look at Native American art, look to the established names to get a feel for the best of the best.  But also take a look at some of the new and emerging artists to see if they might have something that touches you.  Even more than that, spend some time and talk with the artists and learn their stories.  The piece of art then takes on a life of its own – created with the spirit of the artist, but also now linked to you.  You’ll never forget those moments, and your appreciation for the talent of these Native American artists will deepen each time you gaze at their craft.