Life happens.  No matter how carefully people try to take care of pottery, jewelry, weavings, paintings, and other pieces of art, life happens.  Sometimes it happens because the pot or weaving was meant as daily use ware, or the jewelry was meant to be worn rather than just placed in a box on the shelf.  At other times, it is because the piece is showing its age, and has accumulated scratches, nicks, or similar signs of wear. 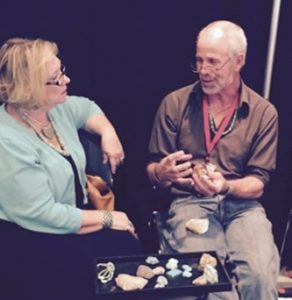 So as lovers of Native American art, what do we do?  One option is to ignore the wear, and accept the piece with its new imperfections.  That is certainly a valid option.  Another option is to have the art carefully restored by a professional, perhaps preserving the original beauty of the piece or fixing some of the damage.  Again, it is a valid option.

If you choose the second option, I have a couple of suggestions.  For pottery, we were referred to a wonderful man in Corrales, New Mexico by the name of Andy Goldschmidt (Ceramicare).  Andy has been doing pottery and ceramic restoration for decades, and is well regarded among gallery owners and museum curators for his meticulous work.  We decided to visit Andy last year, and see for ourselves.  After a circuitous ride through Corrales, we finally drove up to Andy’s studio.  Inside, we found Andy among shelves of damaged pots, some of which were quite large and historic.  We chatted with him for a while, and found him to be quite pleasant and knowledgeable.  I hesitantly left a matched pair of old Margaret Tafoya ollas with Andy, asking him to repair a rim chip on one and a scuff chip on another. Andy gave us an estimate of cost and time, and said that they would be ready in about 6 to 8 weeks.  When they arrived at our gallery, they were extremely well packed and looked magnificent.  Only with the use of a black light could you see where he did his delicate work.  His charge was just what he estimated, so we happily sent off a check that same day.

Another recommendation is in the area of jewelry.  The Navajo, Hopi, and even Zuni jewelry artists are wonderful, both in their silversmithing and in their use of precious and semi-precious gems.  But sometimes a necklace breaks, or a prong needs fixing, or a stone needs to be replaced.  I had been reading great things about Dayton Simmons of Madrid, New Mexico, (silverdaytrading.com) and we made a special point of stopping to see him at this year’s Indian Market.  He is a fascinating man with an endless store of knowledge about turquoise, a stone highly prized and heavily utilized by Native American artists.  We chatted for over an hour, and he gave us a great tutorial on natural turquoise (his specialty) and stabilized or treated turquoise.  We learned how to feel the texture and visually inspect the stones to determine whether or not they were natural.  I left several pieces with Dayton in a little baggie, including some of my mother’s old turquoise earrings that I needed converted from screw back to posts, so I could more comfortably wear them.  Dayton has quite an eye for age and quality, and gave me some very valuable feedback on the value of the items I was leaving, as well as several pieces I was wearing.

So a few days later, as we were heading from Santa Fe back to Albuquerque to catch a plane home, we detoured into the beautiful hills of eastern New Mexico to the sleepy community of Madrid, where Dayton has his shop.  There used to be turquoise mines in New Mexico, but those have largely been exhausted.  Dayton still enjoys tromping around in the hills seeking interesting rocks and possibly even some undiscovered turquoise. His studio is part museum and part retail shop, with a number of interesting exhibits of different types of rocks.

As a gallery owner, I have found that it is important to have a healthy network of quality Native American artists, but equally as important to have a strong network of trustworthy experts who can provide knowledge and even assistance with preserving the rich heritage of Native American art. I am happy that Andy and Dayton are two such experts, and even more happy with the friendships that we have built with them.