It is one thing to know how the Native Americans gather their clay, process it, form and smooth amazing shapes, paint, and then fire the pottery. It is quite another to attempt to create a piece of pottery from scratch.  As I recently learned first-hand, it is an extremely time-intensive and laborious process. 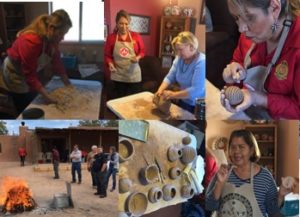 Lyn Fox of Lyn Fox Fine Arts in Santa Fe is a well-respected gallery owner, and he has a broad range of historic and contemporary Native American pots in his gallery.  He often hosts artist gatherings and workshops, but earlier this month he arranged for something completely different.  The event was spending a day at the Jemez Pueblo with one of the most renowned contemporary Native American potters around, Dominique Toya.  So, of course, I rapidly registered myself (and Michael) for this day of pottery.

There are a string of pueblos heading north out of Albuquerque and Rio Rancho, including the Santa Ana pueblo, the Zia pueblo, and the Jemez pueblo.  We had not been to the Jemez pueblo previously, so we didn’t really know what to expect.  It was a quick and picturesque drive from our hotel to the Jemez pueblo on a brisk Saturday morning, heading up NM 550 and NM 4.  The pueblos are framed by the Jemez Mountains, and the vivid red rock is offset by the volcanic remains of the Valles Caldera (New Mexico’s large volcanic crater) and tectonic uplifting revealing many ancient rock strata.

We arrived at the Jemez Post Office to be guided back into the pueblo itself.  We had a small caravan going through the pueblo streets, arriving at the far back of the pueblo near the Jemez River at Dominique’s home.  The back of the house has a spectacular view of the Canon de San Diego, rising majestically to the north and west.

Going into the house, we were warmly greeted by Dominique’s mother, Maxine Toya, also a well-known potter and painter.  With typical Native American grace, she welcomed us and gave us some tasty snacks and coffee.  Then the fun really began.

Dominique talked to us about how they go into the hills nearby and dig the clay out of the earth.  After they bring it back home, they have to clean out all the rocks, roots, and other things that don’t belong, ending up with a very pure clay.  This is dried and screened into a fine powder, with additional inspections to make sure all impurities are removed.  The powder is slowly mixed with water until a moist ball is formed, with continual kneading just like making bread.  Fortunately, Dominique had already dug out the clay and cleaned it for us, so after “making the clay”, we were each able to begin making a pot.

At each step of the way, Dominique described and demonstrated what to do.   We were doing a hand-coil with smoothing after, and this really takes some skill and time.  It is a far more elaborate process than the simple pottery wheel and kiln that I use at home, but then again, Dominique’s pottery is orders of magnitude better than mine as well. Dominique then showed us how to use our carving tools on the pots, and she demonstrated her amazing swirl that she does by hand, without any measurement other than her eyes.

Finally, our pots were finished, so we set them aside to dry.  Knowing that it would take a couple of days to dry before they could be painted and fired, Dominique had already planned for us to complete those last couple of steps.  She had prepared Christmas ornament disks that we could paint and fire after lunch, and when our first pots were dry enough, she would fire them and send them to us.

But before we got started on the painting, we had a Jemez feast.  Nancy Youngblood (another incredible potter) had stopped by to help, as had Jason Ebelacher (an up-and-coming potter also related to the family).  My little head was swirling with excitement, as we had not only one, but FOUR wonderful potters sitting and chatting with us as we had traditional foods including posole (prepared in a big pot outside), enchiladas, red chili sauce with meat, and some amazing biscochitos for dessert.  Poor Michael said that he needed a nap after lunch.  Nancy graciously headed to the kitchen to spearhead the dish washing, while the rest of gathered to learn to paint- pueblo style.

So we started painting our ornaments with red-clay slip and white-clay slip.  Then Dominique brought out the differentiator – her micaceous slip that gives the pots such a sparkle.  While we were painting, she was polishing a small seed pot that would later be finished, and she said that it often takes many hours to polish the pot to give it the sparkle and shine after firing.

We took our ornaments outside, and helped Dominque build a traditional pottery firing – a metal box surrounded by cedar logs, which created an internal temperature of roughly 1200 degrees during the firing.  One of the sad aspects of this method is that often a piece that had taken many, many hours to make and paint would crack during the firing, and Nancy showed us an incredible black four-corners vase motif that she had just fired with a single crack at the rim ruining the piece.  We had the traditional white-corn meal blessing for the firing, then started the fire.

When the ornaments were done, we let them cool and then took proud possession of our meager efforts.  Everyone departed tired and happy, following a most enjoyable day with Dominique, several other Native American potters, and a group of new friends, who learned how to make pots the traditional way, and to gain a greater appreciation of the enormous effort that goes into making a beautiful piece of Native American pottery.