Roughly 120 miles of highway comprise some of New Mexico’s most scenic areas.  They are designated the Jemez Mountain National Scenic Byway, and Michael and I had a recent opportunity to explore and take lots of pictures. 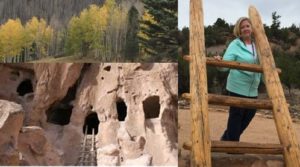 We left from Albuquerque on a sunny Friday morning, driving up to San Ysidro for our first stop.  This is the only remaining village of the seven original “Pueblos de los Jemez” formed by the Spanish when they entered the area in the late 16th century.

The Jemez people migrated from the four corners region several hundred years earlier, and formed a thriving and peaceful series of pueblos.  The Jemez nation had roughly 30,000 people when the Spanish arrived, but fighting and European diseases steadily reduced the population to about 3,000, where it remains today.

On the north end of the Jemez Pueblo is the Walatowa Visitor Center, which has a very nicely done museum (and gift shop) where one can learn much more about the Jemez peoples.

As one travels north along NM 4, the stark red rocks dominate the skyline.  There are even car pull-out areas for photographers or just admirers of nature.

When you arrive at Jemez Springs, the Jemez State Monument is also well worth a stop.  Run by the US Park Service, you can find the ruins of an ancient Jemez pueblo known as Giusewa and the remains of a 17th century Spanish mission named San Jose de Los Jemez.  The short self-guided walking tour brings you right into a reconstructed kiva and the excavated remains of the expansive pueblo.  You can also see the impressive mission.    The indoor museum has some really nice historic pieces, some excavated from the site and others purposely made to demonstrate the skills of the Jemez peoples.

Slightly up the road, you will drive past the Soda Dam.  The hot springs have deposited travertine over the centuries, and water pressure forced a hole into the travertine blockage, creating a most impressive sight from the highway.  But take a few minutes, park nearby, and walk up to the top of the Soda Dam and maybe even take off your shoes and dip your toes into the warm water.

Beyond Soda Dam is Battleship Rock, which is a very large rock formation that has the appearance of the prow of a battleship.  It dominates the skyline as one approaches from the south, and is framed by the 6,000 foot altitude clear skies and pine and aspen trees.

When we got to La Cueva, we took a right turn on NM 4 and headed toward Los Alamos.  As we headed down the highway, we entered the Valles Caldera, the remains of New Mexico’s ancient and very dormant super-volcano.  The caldera is a large meadow that stretches to the north, with lots of elk and other critters roaming in this protected land.  The Valles Caldera National Preserve has a Visitor Center open from May to early October (we just missed it) and you can even make reservations for elk-viewing tours.

We continued to Bandelier National Monument, which I hadn’t visited since I was a small girl.  Bandelier is known for 13th century cliff dwellings, and the US Parks Service has done a remarkable job of preservation.  Be prepared for the free shuttle bus from the parking area to the park, as there is no significant amount of parking at Bandelier National Monument.  A self-guided walking tour leads you through the cliff dwellings, and people are encouraged to climb around and see how the Native Americans lived eight centuries ago.  Bandelier is up in a very peaceful and scenic valley, and it is easy to sit on one of the benches and imagine how the peoples would sleep in the protected cliff dwellings, and then spend their days down on the valley floor engaging in farming, fishing, and other daily activities.

Finally, we departed Bandelier National Monument and headed toward White Rock, the eastern end of the Jemez Mountain National Scenic Byway and the start of our return trip to Rio Rancho.  There is a nice little visitor center in White Rock, and it serves nicely as an entry point if you are starting the byway journey from White Rock rather than San Ysidro.  The White Rock Overlook has some stunning views of the Rio Grande valley, which has the New Mexico portion of the Rio Grande flowing through it as it makes its way to Texas and then to the Gulf of Mexico.

There are so many things to see and places to visit on this small stretch of New Mexico highway that we weren’t able to get to all of them on our short exploration.  But now that we have a taste of what is there, we will definitely be back for more.  After White Rock, we drove to Pojoaque, down to Santa Fe, and back toward Albuquerque for our long, exciting day of adventure.