Earlier, I wrote about the incredible amount of time it takes to make an authentic Native American pot.  Gathering and cleaning the clay, making small coils and forming them into the actual pot shape, trimming and polishing, possibly painting intricate designs, and then firing the pot in the traditional manner.  And then, from time to time, the pot cracks in the firing and is useless.  Traditional outdoor wood firing generates temperatures of about 1200 degrees Fahrenheit, which is enough to harden the clay and fix the paint, but not to the 2200 degree point which most kilns reach that strengthen the molecular structure of the clay to a very hard pot.  However, outdoor wood firing often generates “smoke clouds,” which lend a unique beauty to the pots. 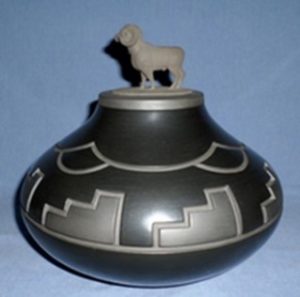 My friend Stacey Carr, a wonderful potter from Laguna, recounted an experience he had just prior to Indian Market, when his firing resulted in several cracked pots.  The anguish in his voice was clear, as he described uncovering what he thought would be potential blue ribbon award winners, only to find a stack of useless clay.  But then he said that this is the life of the traditional Native American potter – sometimes it works well, and other times it doesn’t.  One learns to deal with the highs and lows caused by the firing process.

A few weeks ago, I acquired an incredibly beautiful lidded pot from Jeff Roller, an accomplished potter from the Tafoya family lineage.  Jeff’s pots are very traditional, hearkening back to the 19th century for some of his designs.  One of the things that makes his pots so striking is that he sometimes makes fitted lids for the pots, a very difficult task.  And even more challenging, his lids often have sculpted figures of southwestern wildlife on them.  The one I bought had a magnificent detailed ram, standing about 2 inches above the lid.

Jeff was so careful in packing and shipping the pot to me.  He actually put the pot in one box, carefully bubble wrapped and enclosed in peanuts, and then put that sealed box in side another one, also filled with peanuts.  The lid was done in the same manner, with its own box-in-a-box packing.  Both pieces arrived safely, and Michael and I spent the first evening just looking at the beautiful lidded pot as it sat on the kitchen island.  I spent a couple of days rearranging parts of my somewhat crowded gallery to give this pot its due honor as one of my most elegant and prized pieces of pottery.

Later in the week, I began the process of taking photos of the pot so I could put it up on the Dancing Rabbit Gallery website.  But for some reason, the lighting just wouldn’t cooperate with me.  I was trying to highlight the magnificent color variations. I moved it from the gallery to the back porch, then to the patio, trying to find just the right combination of lighting and backdrops to give me some great shots that did justice to the textures, incised carvings, and ram sculpture of this fantastic piece of pottery.  It was a beautiful sunny fall day, with a breeze blowing from the northwest, but nothing was working for me.  Finally, I brought the pot back in the gallery and tried to use a piece of white foam board as a backdrop.

And then, out of nowhere, a gust of wind came blowing through my gallery window, knocking the foam board onto the lid of the vase, and snapping off the sculpted ram from the lid.  I froze in shock!  This NEVER happens to me.  I have never broken a piece of pottery in my life.  But there lay the ram on its side, with an accusing gaze in its eyes.  My heart stopped for (I think) several minutes, and my stomach lurched about the room.  I was literally unable to move for quite a while, just horrified at what had just happened to this incredible piece of art.  I, too, have experienced, similar to my Native American potter friends, the agony of pottery.  Not an experience I ever, ever wish to repeat.

A couple of hours later, Michael came home from teaching his college students, and I told him what had happened.  Of course, being the wonderful and supporting husband that he is, he comforted me and talked me off of the emotional ledge on which I perched.  He helped me through the classical four stages of grief – denial, anger, depression, and acceptance, and then we started talking about what to do.

The first action I took was to contact Jeff Roller and let him know about my tragedy.  It felt really bad doing that, as part of Jeff’s soul is in the art that he creates.  Jeff was very comforting, and offered to make a replacement lid for the pot, as the lid and the ram figure on top were the over-the-top elements that made this pot so incredibly special.  I am packing up the pot and the lid today, and will ship it to him so he can begin the laborious and time-consuming task of making another lid that exactly fits the pot.  I know Jeff will do an amazing job with the new lid – of that I have no concern – but that pot will always be, in my mind, the one that carries the memory of that gust of wind, and the poor defenseless ram lying next to the lid.  Hopefully we will have the new lid soon, and I can put this magnificent creation on the Gallery website.

My appreciation and respect for Native American potters has increased once again, as I have a much more visceral appreciation of the soaring joy of a beautiful pot as well as the depths of despair at a broken pot.  The life of an artist is not an easy one.  Their tears of joy and sorrow are in the work that they give us.  It also gives us something to consider the next time we look at a pot, blanket, sculpture, painting, or other Native American art work.