A while back, I was able to acquire a pair of black Santa Clara ollas (water jugs), each with the emblematic bear claw imprint made famous by the Tafoya potters.  The two ollas are gorgeous, each standing about a foot tall and in quite good condition.  Unfortunately, they were not signed, as that was not typically done back in the 1920s-1930s, the estimated vintage of these ollas.  However, a pottery expert who I respect tremendously, Mark Sublette of Medicine Man Gallery, has attributed these ollas to “one of only two people in the world who could have made them – either Margaret Tafoya or her mother, Sara Fina Tafoya.” 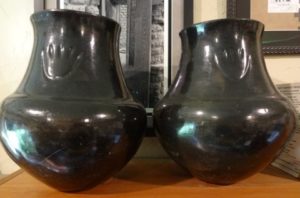 But, without the signature on the pots, I could only call them “attributed to” instead of “made by.”  Being obsessed with provenance and accuracy, I tried to think of ways to learn the story behind the two pots.  “Attributed to” just wasn’t good enough for me.

Last year, I was at the Santa Clara pueblo, visiting with one of Margaret’s daughters, renowned potter Toni Roller.  She and her wonderful husband Ted chatted with Michael and me for over an hour, showing us her studio and taking us on a private tour of her firing area.  Ted was so proud of the metal frame he had built to help protect the pots from falling, burning wood and manure during the firing process, and Toni eagerly showed us a new type of tan clay she had found in the mountains near where her family had been digging clay for many decades.  It was an amazing time with the Rollers, and I learned quite a bit about Toni’s children and grand-children, who are potters and sculptors developing wonderful talents as well.

While in her gallery, Toni showed me the polishing stones that had been handed down from her mother and grandmother, and that Toni used to this day to smooth the surfaces of the pots before firing.  I told Toni about the two pots I had acquired, and she said that it would be easy to tell who made them if she could hold them.  This comment was echoed by her son Jeff Roller, while we talked with him later that fall at Santa Fe’s Indian Market.  So we said yes, the next time we were driving through New Mexico, we would bring the pots for them to see.

Earlier this spring, Michael and I made our preparations to head to Phoenix for the Heard Indian Market, and we carefully packed the two ollas in a large storage bin and put them in the trunk of our car.  It seemed like every time we hit a bump, I tensed up and shot Michael an evil look, urging him to avoid the road bumps.  During our trip, we went on a number of rugged dirt roads out to the Honanki and Palatki Heritage sites near Sedona, and on the washboard roads to Chaco Canyon.  Even State Highways were suspect, as the road surfaces were not nearly smooth enough to soothe my frayed nerves.

But finally, over 3000 miles later, we wound our way up to the Santa Clara pueblo and met with Toni and Jeff.   As soon as we took out the pots (and I made sure they were not damaged), Toni picked up one of them and an incredibly happy look came across her face.  “My mother made this,” she said, “without a doubt.”  She felt the shape of the shoulders to the olla she was holding, and said that her mother made smoother shoulders, while Sera Fina made taller ones.  She put her hand in the olla, and felt the bear claw imprint from the inside. .  She put her hand in the olla, and felt the bear claw imprint from the inside.  “They used their fingers to press the bear claw in the old days, unlike today when we use a press.”  And sure enough, I could reach in and feel the impression on the inside of the pot.  But the final piece of the puzzle came when she felt the smooth surface of the pot.  Her mother always spent extra time in smoothing the surface before it went to firing, which Sera Fina didn’t do as much.  And then Toni came to a startling conclusion.  “The first pot was made by my mother, Margaret,” she said.  “But the second pot was made by Sera Fina, and then smoothed by Margaret.  And they may have even been made at about the same time, as they are very similar in appearance.”

Learning the story of these two pots was invaluable to me.  Being there and watching Toni hold the pots that her mother and grandmother had made 80 or 90 years ago, seeing the glow in her eyes and the smile on her face as she looked back on those fond memories, and hearing her tell the stories about her mother and grandmother – that was the real treasure of the day for all of us.

Jeff was kind enough to write out a note with their conclusions about the provenance of the two pots.  And then we carefully packed away these two treasures, and also carefully packed away our memories of the visit to the Roller Studio at the Santa Clara Pueblo.  My obsession with learning the story of these two ollas was satisfied, but seeing Toni hold the pots gave me even more of a connection to them; much more than just pieces of fired clay.