The land of the American Southwest contains vivid contrasts in appearance.  Many millions of years ago, what we now know as Arizona, Utah, Colorado, and New Mexico was close to the equator, and part of a large inland sea.  Continental drift moved this land north and tectonic pressures caused massive uplifts in the land, resulting in the Rocky Mountain chain and the high plains of the Southwest.  Volcanos were quite active as well, and much of New Mexico and eastern Arizona remain covered in thick layers of extruded lava.  Relentless wind and water also helped shape much of the terrain, exposing colorful layers of sedimentary rock and fossils, eroding steep bluffs, and carving meandering canyons. 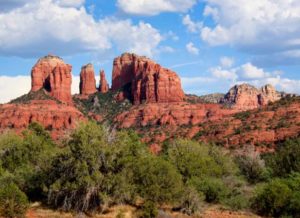 An initial impression of the American Southwest is one of raw, harsh, and almost forbidding terrain.  Much of the land is high altitude, over 5000 feet, and vegetation struggles to gain a hold in the parched soil.  Sources of water are at a premium, and many of the early Americans settled in areas where water flowed consistently.  In many cases, when the water ceased, the communities also moved to other areas where water was more prevalent.

But when one looks longer and deeper, one sees a surprising palette of colors and shapes.  One of my friends, Brian Yatsattie, posts pictures of sunrises and sunsets that are rich and vibrant natural portraits.  Michael and I recently traveled through Sedona, with highway turnouts every few hundred yards so we could park and admire the red and tan horizontally striped mesas.  In eastern Arizona, we drove through the Painted Desert, a National Park Service treasure with amazingly beautiful exposed canyon walls.

In addition to the physical structure of the land, Mother Earth has added her gentle touches to the American Southwest.  As one drives south through Arizona, the high plains grasses give away to stands of saguaro cactus on the craggy peaks, or large stands of pine trees.  The saguaro are magnificent, some living to over 150 years in age.  Their beautiful, delicate white flower is the State flower of Arizona.  One can often see bird holes carved in the sides of the saguaros, providing safe nests for woodpeckers, wrens, martins, and a variety of other avian desert dwellers.

We also went through Payson, a charming town in the midst of the largest Ponderosa Pine forest in the world.  The flora has adapted to the altitude and climate, conserving the scarce water deep within their structures and sending deep tap roots into the earth.  Some plants secrete chemicals that help break down the lava and rock into dirt, and anywhere a crack appears through erosion or other processes, plant seeds soon attempt to gain a toehold.  That is, of course, if plants had toes.

Similarly, the fauna has adapted to the conditions.  Energy conservation strategies are prevalent, ranging from rough skins and camouflage colors to cool burrows and remarkable endurance.  During the day, you won’t see much moving about, as most animals gather food during the very early morning or late evening hour when the temperatures are more moderate.  As we explored a little of the magnificent countryside, we saw lots of creepy crawlies, many that sting or bite.  Snakes, spiders, scorpions, and similar critters that we left alone, and asked them nicely to leave us alone as well.

When the early Americans arrived in the Southwest, they saw much of the beauty around them, and also found ways to adapt to the local conditions.  They saw the advantages of constructing safe rock dwellings along the cliffs, using or constructing caves and homes.  They were very aware of the scarcity of resources, and utilized what they had very carefully.  Many of the traditions honoring Mother Earth came from those early interactions and utilizations of the scarce resources.  Rather than using the European approach of changing the earth to fit the needs of individuals, the early Americans adapted their ways to live in harmony with Mother Earth, a gentler and more economical approach.

Almost everywhere we go in this world, we can see the natural beauty inherent in the land.  The American Southwest presents a type of beauty that is very different from that found in Europe or the eastern part of the United States.  It is raw, primal, harsh, colorful, vibrant, and yes, quite alive.