On a recent trip to Colorado, we decided to drive to the summit of Mt. Evans.  In addition to being one of Colorado’s “fourteeners,” it is also the highest point in North America that can be driven on a paved road.  A nice, peaceful excursion, we thought.  It wasn’t until we had passed the National Park Service entry booth and saw the size restriction on vehicles that doubt began to creep into our minds.  The second thing that made us a tad bit nervous was that Mt. Evans was only open in the summer, and we were in the last week of “no need to call ahead” for road conditions and park closure information. 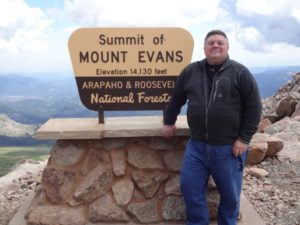 The summit of Mt. Evans is 14,271 feet, but the parking lot tops out at 14,130 with a narrow walking trail to the true summit.  It is well above the tree line, and quite a bit colder than at the base.  As you drive, you go up about 9,000 feet in altitude in only a dozen miles, so the road is fairly steep.

The road from the NPS station to the summit started out nice and smooth, with a nice white border line on both sides, and even a few pullout areas to admire the blue spruce, lodge pole pines, quaking aspens, and abundant wildlife.  It will be a pleasant cruise through the scenic Rockies– or so we thought.

At this point, I should point out that Michael was driving our car, and he is terribly afraid of heights.  But he has also done some amazing things, like climbing across the top of the Sydney, Australia Harbour Bridge and even taking a walk around the outside top of the tallest building in Sydney, The Sydney Tower, just to demonstrate that he is in control of his fears, not the other way around.  So he knew that this might be a test of his nerve.  Little did we know.

Another point, once you start up the trek to the summit, you need to decide early on whether or not you are going to turn around and go back.  When you leave the tree line, the roads narrow to barely the width of two cars and the hairpin turns begin to tighten.  There were several times that I asked Michael if he wanted to turn around, and he laughed (through gritted teeth) and pointed out that there were no places where we could turn around the car, and he really didn’t feel like backing the car down miles of narrow, winding road.  So we continued.  We did reach a turnout and parking area at Echo Lake, where many people stop for the bathrooms, meals, and a chance to settle their nerves.  But we continued on.

As we passed the tree line, I continued to snap pictures of the amazing vistas, as it seemed that we could see for a hundred miles.  On one side of the car, the mountain went straight up, with a nice white line and twelve foot snow poles carefully marking the edge of pavement.  Although, it should be noted, going off the road on the mountain side would only be a matter of inches, as there was no shoulder at all.

But on the other side of the car, the mountain went straight down for thousands of feet, and I was able to get some beautiful photos.  On this side of the car, the white lines had long ago disintegrated and there were no snow poles, as they would likely be blown away at the first breeze.  Because of the switchbacks, Michael went from being on the mountain side to the cliff side frequently.

As we continued our ascent, the road narrowed, and other cars began to descend.  When there were no other cars visible, Michael carefully navigated the car to the exact center of the road, cruising along at 5 to 10 miles per hour.  With another car descending, he crept as far to the mountain side as he could, or went out on the cliff side gingerly, if appropriate.  Several times it seemed as though the opposing mirrors might touch, as each driver passed the other at a very slow speed.

The worst time came near the top, when I could look up the mountain as we neared a switchback, and see the underside of a car coming down, less than ten feet away.  On those switchbacks, even my nerves began to fray.  Michael’s heart raced to the point I could hear the thumping in his chest, probably going 200 beats per minute.  And yes, we will need to get the steering wheel replaced due to the finger indentations permanently embedded in the hard plastic!  I kept encouraging Michael to breathe and to not hyperventilate, as visions of plunging down several thousand feet danced through my head.

To compound matters, as we saw the upward path, I spotted a couple of mountain goats lounging on the steep hillside.  So of course, I shouted out “Stop the car! Stop the car!”  Michael managed to do so, passing his annual stress test in the process, and dryly asked me if I had an emergency or if I was just crazy.  I snapped my pics of the mountain goats, and calmly suggested we might continue to the summit.  Michael just gave a few squeaks, and continued his white-knuckle ascent.  The man has a strong heart.

We reached the summit, and found a great parking spot in the turnaround parking lot.  There is a stone lookout structure near the parking lot, as well as more bathroom facilities.  Over the parking lot crest is the Meyer-Womble Observatory, and in the other direction is the hundred foot climb to the true summit.  A note of caution – the air is cold, and very thin at this altitude.  Take a few minutes to bundle up and breathe deeply to get used to the altitude before you begin scampering about like a frenetic chipmunk.  “This adventure will certainly go in our next book,” I cheerfully exclaimed.  Michael just looked at me and slowly commented, “Only if we live long enough to get off this rock.”  I guess he was still a little buzzed by the drive up Mt. Evans.

The drive down was far more placid.  Though it was the same road, Michael knew what to expect, so he was more easily able to navigate without undue stress.  We got back down to the National Park Service station, stopped for a few minutes to gather our breath and plan the rest of our day, and then we continued our adventures in Colorado.  If you are near Denver, take a day trip out to Mt. Evans and enjoy the adrenaline rush of ascending this scenic byway.  But don’t let the driver enjoy the scenery as you drive.  Focus on the narrow, switchback road to the top.  Then enjoy when parked.