The Zuni artists have been exhibiting their art for many years, sometimes in shows at the Zuni Pueblo, and sometimes at prestigious galleries, museums, and events around the country. This August, however, marked the first time that The Zuni Show had been held in Santa Fe in conjunction with Indian Market. 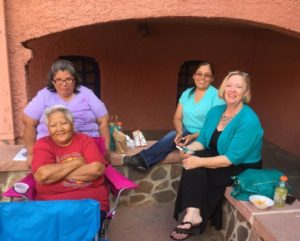 By almost any measure imaginable, this show was an amazing success.  Robin Dunlap and Bronwyn Fox of the Zuni Foundation and Keshi, The Zuni Connection, got the ball rolling, and took the idea to the Zuni artists for coordination and implementation.  The focus of the show was intended to be all Zuni, all the time, but it became more than just an initial count of a hundred or so artists showing their wares.  It became much, much more.  By the opening on Saturday morning, Robin and Bronwyn were exhausted, yet so excited as the show unfolded that they were almost glowing.  All of the countless hours of work, sweat, and tears were reaching a crescendo.  They had advertised in national magazines, spread the word through social media, and yet they weren’t sure how they would stack up against the concurrent prestige of Indian Market located just a few blocks south.

The first really impressive point of The Zuni Show was the venue.  The folks at the Scottish Rite Temple in Santa Fe provided the perfect venue: a very large, air-conditioned room for artist display; a sizeable and shady courtyard for outside activities; and a large kitchen for tasty meals.  There was even a large theater in which an old black and white documentary film about the Zuni Pueblo, with very rare footage, was being shown.  Though parking and bathrooms were a bit tight, everyone seemed to make it work out, and improvements are already being considered for next year.

The second outstanding aspect of the Zuni show was all the activity in the courtyard.  Located immediately off the main artist area, this courtyard hosted dances every hour all day long, ranging from the nationally acclaimed Zuni Olla Maidens to groups of younger people with only a few years of experience.  That is also where the food sales were set up, so we were able to get a refreshing drink and a tasty snack, sitting in the shade and enjoying the music and dance.  While only intending to sit for a few minutes to watch our beloved Zuni Olla Maidens, Michael and I ended up staying for several hours.  I had such fun chatting with the lovely ladies of Zuni Pueblo as they watched their children and grandchildren dance, and our laughter and merriment spread throughout the courtyard.  Zuni Pueblo is known by many as the friendliest pueblo, and my time with these lovely ladies certainly gave proof to that.  In particular, I enjoyed the buffalo dance, as the Zuni announcer described the significance of the white buffalo to Native American cultures and explained aspects of the dance.

The Governor of Zuni Pueblo, The Honorable Val R. Panteah, Sr., and his lovely wife were very visible at The Zuni Show, and we were so honored to be introduced to them by our special friend Jeff Shetima.  The Governor later made a touching speech in which he spoke with pride about the abundant talent in the Zuni Pueblo, how wonderful it was to have so many Zuni artists all working together to showcase this talent, and how everyone (including a reference to this boisterous group of ladies in the corner of the courtyard) was having a wonderful time at The Zuni Show.  Later that afternoon, as I was heading to acquire more beautiful fetishes from some of my favorite carvers, the Governor stopped me to personally introduce me to the Lieutenant Governor, The Honorable Birdena Sanchez, and her husband.  As with everyone else at the Zuni Pueblo, the Governor and Lieutenant Governor made us feel incredibly welcome as part of the Zuni family.

Finally, we have to talk about the artists.  What started out as about a hundred artists turned into almost two hundred with last minute additions.  Robin and Bronwyn took it in stride, finding room for the additional artists.  Before the show, Robin and Bronwyn made trips to Zuni Pueblo to work with younger artists who may not have been to big shows before, bringing them up to speed on business skills to help them be as successful as possible.

Though mostly known for precision jewelry and exquisite fetish carvings, the Zuni have highly regarded potters, weavers, and painters as well.  As we made the rounds, we stopped to chat with all of our Zuni artist friends, and even made some new friends along the way.  That, of course, took quite a while, as we had to both admire their lovely work, as well as find out how they were doing.  We even took the opportunity to have many of the carvers sign our new book, Tales of The Dancing Rabbit, as we have several stories in the book about various aspects of the Zuni Pueblo.  That publisher’s proof copy also made the rounds of Indian Market, and we will always treasure both the art and the artists for making this trip to Santa Fe so memorable and happy.  Of course, we had to acquire just a few more items for the Gallery, though I really wish I could have purchased it all.  The good news – it appeared to us as though quite a few artists were doing well with their art, and I suspect that most of them went home with far less inventory than they brought.

Rumor has it that next August, there will be the Second Zuni Show in conjunction with Indian Market.  It is the third weekend of August.  There are, of course, many ways in which one can approach this.  You could do a day at Indian Market and a day at The Zuni Show, or possibly a half-day at each show, or if you don’t mind a short walk between venues, park all day at the Convention Center garage and take the short walk between venues.  But don’t be surprised if you end up spending more time at The Zuni Show than you had planned.  The first Zuni Show was magnificent, and it will only get better from here.  Hope to see you there next year.