The story of Michael Kirk is inspiring, to say the least.  After high school, Michael enlisted in the US Marine Corps at the height of the Vietnam War, and served an honorable term in which he learned many leadership and life skills.  After he left the Marines, Michael went to college to learn the craft of silversmithing and jewelry making, ending up teaching some of the graduate classes due to his rapid accumulation of knowledge and demonstrated skills. 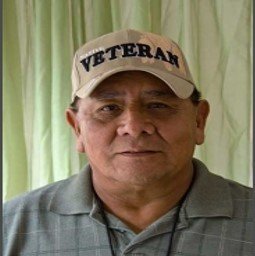 Several years ago, I was at IPCC’s Shumakolowa Native Arts shop, and manager Ira Wilson beckoned me to follow him into the back storeroom.  “I just got this new item in, and it hasn’t yet been put out on the floor,” he told me.  He then unboxed a gorgeous gold sunburst pendant with turquoise and opal inlays.  Having a fondness of incredible jewelry, I knew right away that it was a Michael Kirk creation, so I bought it.  Then I asked about the price.  That is how exquisite Michael Kirk’s jewelry is.

So at this year’s Indian Market, I just had to drop by Michael’s tent and say hello while wearing his stunning pendant.  I wanted him to know how much I appreciated the piece, and how happy his talent had made me.  When we walked in, his daughter Elizabeth greeted us and immediately knew that was a piece that her dad had done.  Michael and his lovely wife Marie came over to chat with us, and it was such fun getting to know them better.  After a bit, Elizabeth and I wandered over to see some of Michael’s newest pieces, including a double-sided pendant that wasn’t quite finished, and some of his signature actinic blue pieces.  He has some cuffs and bracelets in the blue that can’t quite be replicated by other jewelers.  The blue reminds me of a deep New Mexico afternoon sky, and I was quite tempted to take home a piece or two.

My attention was yanked over to a display of rings, however, as I had been searching all over Indian Market for just the right inlay pinkie ring to go with my Michael Kirk pendant and some of the inlay cuffs I also have.  Michael had just one inlay ring, and it was just what I was seeking, and it fit!  So yes, it came home with me.

While I was admiring Michael’s work, my husband Michael struck up a long conversation with Michael.  He told my husband stories of his military service, for which we are very grateful, and also how he learned his craft over time by trying different things and working hard to perfect his craft.  Much of what Michael has learned has been persistence and effort, and that hard work has been rewarded with numerous ribbons at juried competitions.  Today, he is recognized as one of the outstanding Native American jewelry makers, and he has extended his talents by including his three children and four grandchildren in the family business.

Michael Kirk is an American success story.  Today, in his late 60’s, he shows little sign of slowing down.  I sincerely hope this continues for a long time, as his jewelry is exquisite, his family is wonderful, and Michael Kirk is a very inspiring role model.