The Indian Pueblo Cultural Center (IPCC) in Albuquerque has hit a grand slam home run!  The “Meet-the-Artist” event at the IPCC Starbucks yesterday was overwhelming in its success.  Following Tuesday’s  Albuquerque Channel 7 TV feature and the Albuquerque Journal newspaper article, and supported by a major social media campaign by IPCC staff, people turned out in droves to purchase one or more of the five magnificent travel mugs and have them individually signed by the five highly acclaimed Native American artists who designed them. 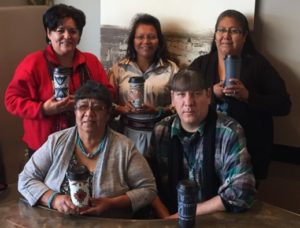 IPCC has really upped its game this year, the 40th anniversary of its founding.  A major museum redesign spearheaded by Museum Director Monique Fragua has vaulted their interactive and educational exhibit space to top-level prominence.  A continual emphasis on meaningful and insightful seminars and presentations has increased the relevance of IPCC as a regional information source.  And now, to follow this series of home run efforts, the IPCC staff have knocked a bases-loaded pitch out of the ballpark!

Earlier in the summer, Ira Wilson approached a few artists about designing a travel mug that represented their Native American heritage, values, and evoked images of their pueblo.  He assembled an all-star cast, including Erik Fender of San Ildefonso, Frederica Antonio of Acoma, Robin Teller of Isleta, Elizabeth Medina of Kia, and Patricia Lowden of Acoma.  Initial designs were submitted, reviewed, and revised until both IPCC and the artists were happy with the prototypes.

Then IPCC jumped into high gear, finding a quality manufacturer and placing an initial order.  The online orders started around December 10, and IPCC was a little surprised and quite gratified at the enormous response.  They planned a “Meet-the-Artist” event for December 21 and quietly hoped that people would come.

Yesterday morning arrived, and Michael and I had a leisurely breakfast at the Pueblo Harvest Café at IPCC (you simply MUST try their blue corn pinon pancakes) and noticed a line of people lining up outside the Shumakolowa Native Arts museum shop.  When Shumakolowa opened at 9 a.m., the rush to buy the travel mugs was astonishing.  People were buying complete sets of the five different mugs for themselves, then picking up others for unique Christmas gifts.  We thought “oh, that is nice, but the real action will be over at the IPCC Starbucks across the street where the artists will be.”

We meandered across the street, and immediately noticed that the Starbucks parking lot was quite full, particularly for a Wednesday morning.  We walked in, and what to our wondering eyes did we see, but a few dozen people lined near the entrance to purchase more mugs!  We were immediately met by Ira Wilson, who was clearly pleased by the electricity in the room.

Most of the seating was occupied by people having a cup of coffee, and Robin Teller was seated in the corner signing her mugs for a very appreciative group of purchasers.  She graciously assisted with photos and creating a memorable moment for each person.

We tucked in at a small table next to Robin, and began to watch the proceedings.  The line for purchasing mugs at the front door never diminished, as more people kept coming in to buy.  Finally, Robin had a small break, and we had a chance to say hello and give her a small bag of biscochitos that Michael and I had made a couple of days earlier.  At 11, when her shift was finished, Erik Fender and Elizabeth Medina took over the signing.  Many of the purchasers had waited with a cup of marvelous Starbucks coffee for them to arrive, as they were eager to get signatures from all the artists.

We got a big hug and greeting from Erik, and people started lining up a quarter hour before he and Elizabeth were to begin.  So, of course, Erik and Elizabeth happily began greeting and signing.  Michael, always looking to help out in whatever small way he can, became the unofficial artist waiter, and shuttled coffee, water, and hot tea to the artists at their request, as they were too swamped to even stand up.

I got a chance to chat with Robin after her shift ended.  She is the daughter of Stella Teller, and the Teller family is directly responsible for reviving pottery at the Isleta pueblo.  Robin’s mom is known for her storytellers, and Robin has become an acclaimed potter in her own right.  As we chatted, more purchasers noticed her still there and asked for her signature, which she happily provided.

Michael had a chance to chat with a lady who was carrying a set of signed mugs to London, and also talked with a couple of Seattle tourists who wandered in, saw what was happening, and snatched up a few travel mugs of their own.

Erik and Elizabeth continued to sign, and the line at the front door briefly abated when they ran out of some of the mugs.  A quick trip across the street for more mugs helped, but again they ran out of almost everything.

At noon, Frederica Antonio and Patricia Lowden were scheduled to begin their shifts.  Robin was still there, and Erik and Elizabeth moved off to the side so the last two artists could begin.  Again the line formed, as people had patiently waited for the last artists to begin.  Frederica had dressed in traditional Acoma attire, and she also brought pictures of her grandmother.  She also brought a wonderful container of tasty homemade cookies to share.

Stories were told, pictures were taken, and special memories were created.  People who may not have ever been to IPCC came to visit the artists, and the new IPCC Starbucks was able to step up and handle the crush of visitors.  The Albuquerque Journal stopped by to interview several of the artists while we were there, and they published a follow-up article in this morning’s Journal.  The staff of IPCC, including the Food and Beverage Director, Gift Shop Manager, Social Media Manager, and chief blogger were all there at different points of time, excited (and possibly a little bit pleasantly surprised) about the overall success of the event.  We departed for the long drive home at around 2 p.m. and artists and purchasers were still milling about, clearly buzzed by what they had just witnessed.

As I told Ira afterwards, this was a clear grand slam event for IPCC and Shumakolowa Native Arts and the IPCC Starbucks.  Finding ways for people to connect with artists brings the art alive, and the pictures, stories, and memories will persist for a long, long time.  IPCC is an energetic, enthusiastic, and very capable organization that is showcasing the art, artists, and culture of the 19 New Mexico pueblos in a very appealing way.  If you haven’t been to IPCC in a while, or if you are planning a trip to Albuquerque in the near future, IPCC has become a “don’t miss” destination.  You can take advantage of Shumakolowa Native Arts by shopping online or in the store, and even have a tasty cup of coffee across the street at the IPCC Starbucks, or fill up your gas tank at the IPCC Four Winds Travel Center or rest your weary head at the IPCC Holiday Inn Express in the historic downtown.  Enjoy your visit!