One of the most exciting aspects of being a gallery owner is the ability to travel the American Southwest to discover new treasures.  Some of these treasures come from estate sales, and other treasures are acquired directly from artists.  Earlier this week, I was reflecting on some of the adventures that Michael and I have had in the past few years, and it brought me back to some of the memories of my mother.  She and my dad did the same thing several decades ago, spending weeks crisscrossing the Southwest and finding exciting pieces of art.  As a small girl, I was with them on those journeys, but I didn’t realize at the time the significance of what they were doing. 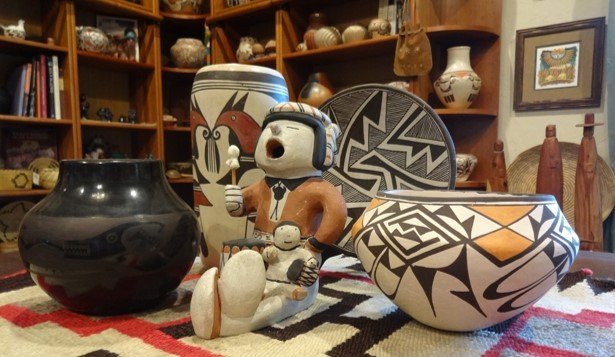 My parents were not big time collectors, or fancy gallery owners.  They were very limited in both scope and means, and were very selective in what they did.  As part of their travels, they purchased from the “best of the best,” what we know today as the Matriarchs of pottery.  During the Anglo expansion into the American Southwest in the early part of the 20th century, Native American art became very collectible, and was rapidly transported back to the Eastern states.  Though Native American potters had been making functional pottery for centuries for their daily use, a number of them quickly realized that they could make extra pots for the tourist trade and create a business.  As a result, Mother was able to meet and build long-term relationships with many of these potters, including the select few who became recognized as the Matriarchs.  And as I go through my own journeys and form my own relationships with Native American artists, I am continually drawn back to recognizing the path on which my parents traveled and how that is so parallel to my own.

A Matriarch is typically defined as the head of a household or tribe.  In this sense, the term Matriarch is used to reflect the best Native American potters of that era, who laid the foundations for a new and highly collectible art form.  Many sources recognize a half-dozen or more true Matriarchs, such as Nampeyo of Hano (Hopi), Maria Martinez (San Ildefonso pueblo), Lucy Lewis (Acoma pueblo), Margaret Tafoya (Santa Clara pueblo), Helen Cordero (Cochiti pueblo), Marie Z. Chino (Acoma pueblo),Rosalia Medina Toribio (Zia pueblo), and Paqua Naha (Frog Woman, Hopi).  Some might include others in this select grouping, such as Rose Williams (Navajo) or Rose Gonzales (Santa Clara) for the innovations they contributed.  Because this is a completely subjective assessment, some might argue for the deletion of certain names from this list or the inclusion of others, which is fine.

One of the amazing aspects of my mother’s activities is that she not only met and built relationships with these Matriarchs, but she also formed several lifelong friendships with them and their families.  Some of these memories are recounted in future stories, and are part of our treasured family history.

Lineages also figure into this story, as the Matriarchs often passed along their skills and talents to their children.  Rose Williams, for example, passed along her talent to her daughter Alice Cling, who also passed that along to her own daughter, Michelle Williams.  The very talented and prolific potter Margaret Tafoya had many children who became expert potters, and one strand of her lineage runs through her daughter Toni Roller, Toni’s sons Cliff and Jeff Roller, and Jeff’s sons Ryan and Jordan Roller.  In fact, if you rightfully include Margaret Tafoya’s mother, Sarafina Tafoya, one can count Ryan and Jeff Roller as seventh-generation expert potters.

Another lineage that has developed expert potters is that of Maria Martinez (Pond Lily) of Sal Ildefonso pueblo.  Individually, and also in conjunction with her husband Julian, she continued a thousand year tradition of pueblo pottery making and extended it into the art world.  She recreated both the historic polychrome designs of generations past as well as continuing the oxygen-reduction technique that produced today’s well-known black-on-black finish.  Her niece Carmelita Dunlap came to live with her as a young girl when Carmelita’s mother sadly passed away at an early age, and Carmelita learned at the hands of a master potter.  Carmelita’s daughter, Martha Appleleaf, took up the art, as did Martha’s son Erik Fender (Than Tsideh, Sun Bird).  Now Erik’s son, Ian, and grandson, Talyn, are also making pottery, and will be doing so with the expert guidance of their father and grandmother.

As I mentioned, Mother was honored to build friendships with most of the very talented Matriarchs, and even had some like Ivan and Rita Lewis, Juan Tafoya, and others drop by their Santa Fe home to stay for short visits (usually coinciding with Santa Fe Indian Market).  Mother and Rita became best friends, and mother was heartbroken as she later attended Rita’s funeral.

I am also honored to carry on the tradition started by my great-grandmother, grandmother, and mother, in getting to know the artists and their culture.  It is so wonderful to see my friends when we travel to the American Southwest, to be greeted as a friend, and welcomed into their lives.  I have gotten to know a number of artists and their families over the years, and it is so much fun talking to someone like Carmel Lewis about her mother Lucy and my mother Jo.  The same is true of the Roller family, the Fender family, the Roller family, and many others where our family roots are intertwined over the generations.

I am fortunate to be able to indulge my passion for Native American art in this way.  Learning the stories of the artists, their culture, their backgrounds, and even their families brings much more substance to the art they produce.  No longer just a lump of fashioned clay, even with the pretty designs and form, but much more of a peek into the soul of the artist himself or herself.  Their art enriches my soul, and the relationships I have formed have enriched my heart as well.  That becomes the driving force for my gallery, and why I strive to tell the stories that I tell in the way in which I tell them.

So the next time you have an opportunity, spend a few minutes and talk to an artist.  Learn something of who they are and how they feel, and gain some insights into what their art says.  From that first encounter, you will embark on a wonderful, rewarding journey and will never look at a piece of art quite the same way again.