Recently I was scanning social media and came across a news article about Carolyn Bernard Young.  What caught my eye was that she is a Choctaw potter and lives relatively close to me in the Dallas/Fort Worth area.  So I contacted her and asked if I could visit for a brief chat to learn more about her and her work.  We arranged a time, and Michael and I set off on a lovely Saturday morning for another adventure.

We arrived at Carolyn’s home and studio, and were warmly greeted.  Her husband Jim had built a large studio behind her home (yes, I immediately had studio envy) where Carolyn carefully crafts her beautiful works.

As we chatted, Carolyn shared some of her potting background, which is remarkably similar to my own.  We both learned over twenty years ago at the same facility, and we both started out with wheels and kilns as our main tools of the trade.  Carolyn has demonstrated her talent with entries and awards at highly prestigious shows, including Santa Fe’s Indian Market, the Heard Museum’s Indian Market, and the Eiteljorg Museum of American Indians and Western Art.

Carolyn has moved from producing beautiful, familiar Anglo-style pottery to a concentration of traditional Choctaw pottery, and the transition has been very successful.  We compared notes of Oklahoma artists we know, and rapidly found that we were both friends with Chase Earles, Karin Walkingstick, and several others.  In fact, Carolyn is collaborating with Chase to help preserve the methods and symbols of Oklahoma-area tribes and their pottery.  Her clays are from the Oklahoma clay digs, and her pictographs are stunning in their elegance.

Yes, as you would expect, I did manage to acquire a lovely bowl from Carolyn, as well as an interesting totem stick of carved pottery mounted on a wood base.  Though the latter is not a traditional piece used by the Choctaw, it meticulously recreates the symbols and images of this tribe, and I must say that it looks very striking hanging in my Gallery.  In her efforts, Carolyn has managed to bridge the traditional pottery forms and images with a new, contemporary approach that I believe will widen the appeal of Choctaw pottery and also further an understanding of this vibrant tribe. 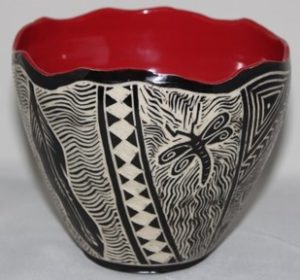 What Carolyn is quietly doing in her north Texas studio is being repeated across the Southwest.  Artists are going beyond just production of art for their own financial gain and working, often in collaboration with others, to preserve and teach others about their culture and their art.  I have often said that art is the lens through which we view a culture, and Carolyn is making a strong effort to enhance the lens for her tribal heritage.

Others are doing the same – Chase Earles of the Caddo, Karin Walkingstick of the Cherokee, Erik Fender of San Ildefonso Pueblo, Jeff Shetima of Zuni Puelbo, and many more – all working to teach their craft to others and to faithfully preserve their cultural roots.  That is one reason why I am so attracted to certain artists.  Yes, their works are spectacular, but they have the added dimension of education that appeals so much to me.