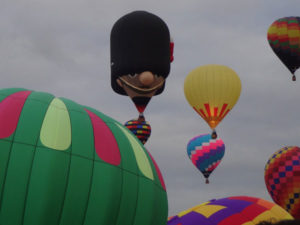 Michael and I met up with a couple of friends from London for this year’s Balloon Fiesta, and we had a grand time.  The Saturday and Sunday mass ascensions typically have between 500 and 600 balloons, and this year was no exception with 570 balloons scheduled to rise.  Most balloons carry a pilot and passengers, with the largest gondolas holding a very tightly squeezed ten passengers for the one to two hour trip.  Only a few hundred people get to ascend, but the festival on the ground will see upwards of 80,000 who flock to the Balloon Fiesta grounds for the event.

First note to self – this is a VERY EARLY event.  We picked up Harry and Elaine on Saturday morning at about 4:30 a.m. and headed to the massive traffic inflow to the parking areas.  If you don’t get there early, be prepared for either a very long walk or possibly missing the fun that occurs at dawn.

Once we parked, we gathered our folding lawn chairs and blankets, and tucked our thermoses of hot cocoa and hot tea into a canvas bag, and set off across the field to find a spot for balloon watching.  No glass materials like wine bottles allowed in, so be careful what you pack.

Second note to self – this is a VERY COLD event.  The temperature at this mile-high altitude during October is in the low 40’s right before dawn, and we have even been there when the temperature was close to freezing.  Coats, gloves, hats, and blankets are a MUST for our tender Texas skins.

As you enter the gates, you are greeted by a big midway of vendor tents.  If you want, you can purchase food and drink, official Balloon Fiesta merchandise, and various arts and crafts.  There is a Chaser’s Club pavilion with folding chairs and a light breakfast, and a more elegant Gondola Club pavilion with nicer folding chairs and a nicer light breakfast, but both of these tend to sell out months in advance of the event.  There are also a number of corporate and VIP pavilions, requiring connections to get into.  So for the rest of us common people, we sit in the grass surrounding the balloon launch site.

The hot air balloons are brought into the site generally in trailers, and they come from all over the world.  We were right near one from Sao Paolo, Brazil, and we saw several from Korea, Japan, Germany, France, and other countries as well.  When the trailer arrives, the balloon is unfolded and stretched out on the grass, and it is carefully inspected by the balloon team and pilot.  Lines are stretched out, and the gondola is unloaded and the burners are tested.

For those not familiar with balloon launches, like Harry and Elaine, this was the first moment when eyes start to gleam and excitement starts to build.  Crowds gather around the gondolas and watch, and often the crews give impromptu discussions and explanations of what is going on.  The first roar of the propane burners into the pre-dawn darkness brings out a certain animal spirit, an attraction to the foot-high flames shooting into the sky.  I looked over at Harry and immediately thought of a six-year-old little boy on Christmas morning, with the excitement vividly expressed on his face.

The crews lift one side of the envelope (the big balloon piece) and start a fan blowing air into the space.  One crew member told us a few years ago that the space of a regular size balloon could hold the equivalent of a million basketballs.  After the fan gets the airflow started, they tilt the gondola and burners to pump hot air into the balloon, and the expansion begins.  After enough air is pumped in, the envelope “stands up” and begins to reach a more vertical state.  The ground crew is careful to keep the balloon securely on the ground.

The first group of balloons to go vertical are called the Dawn Patrol, and they do simultaneous burner lightings called morning glow, which whips the crowd into a frenzy.  At the right time, they are released and soar into the sky to do a further check on wind conditions.

A group of officials called zebras carefully monitor wind conditions and signal the sequential launch of balloons in an orderly manner.  Without the zebras, chaos would reign and safety would be absent.  This is not a risk-free endeavor, and the zebras and highly trained balloon crews go to extreme lengths to minimize the risk and provide a safe experience.

We were not able to secure ride tickets for this year’s event, as they are typically sold out months in advance.  We did, however, promise Harry and Elaine that we would do so the next time they came back to New Mexico, and if we knew their schedule with enough advance warning, possibly even for the Balloon Fiesta Mass Ascension.

For several hours, balloons of all sizes and shapes soar into the sky, one row of launch at a time.  The unique shapes like Darth Vader, the Creamland Dairies cow, the big green boot, and the fish tend to be crowd favorites, but normal balloon shapes are often quite colorful as well.  After a few hundred go up, one can look to the direction in which they are headed and become overwhelmed with the quantity aloft.

This year, we had a spectacular second Saturday, even though the wind came up and stranded the last dozen or so balloons on the ground.  Earlier in the week, rain had cancelled several days of ascensions, and the next day’s Sunday mass ascension was cancelled due to rain.  We hit it just right, and had a thrilling (and very, very early) adventure.