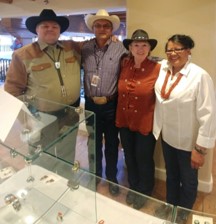 Over the upcoming Memorial Day weekend, May 25-26, the Museum of Indian Art and Culture (MIAC) will host the Native Treasures show in Santa Fe.  Roughly 200 Native American artists were invited to participate in this show, which is the 14th of this series put on by the Museum.  The Museum is located on Museum Hill, but the actual show will be at the Santa Fe Convention Center, just north of the Plaza.

We are interested in this show for a couple of reasons.  First, there are some artists participating who weren’t at the Heard Museum show last March, so we get a chance to catch up with them.  Second, and always a great reason, the proceeds from this show (not counting artist sales) go to the education and programs put on by the Museum.  If, as the old saying goes, knowledge is power, then this organization is working hard to make us more powerful.

As mentioned, it is a fairly small show, but it is indoors in a well-lit, temperature-controlled environment.  This is a direct contrast to larger outdoor shows.  And fickle weather becomes much less of a factor for artists or attendees.

The show, as are all shows, constantly seeks generous donors to help sponsor the cost of the event.  As a 501(c)3 non-profit entity, MIAC sponsorships are tax deductible for the excess amount contributed above goods and services received.  What that means is you put in some money, get something tangible in return from MIAC, and then write off the rest on your taxes.  Generally speaking, everybody wins in that scenario. Even as a small Gallery, we are proud to be a sponsor of Native Treasures, giving back to our Native American community.

One other element that makes this show attractive to our Gallery – we go on the road each June to the Brian Lebel Old West show, and cart a lot of our Gallery items to Santa Fe for that show, which is June 20-21 this year, only one month after Native Treasures, and in the exact same venue.  Stop by and say hello!  We would love to see you in person!