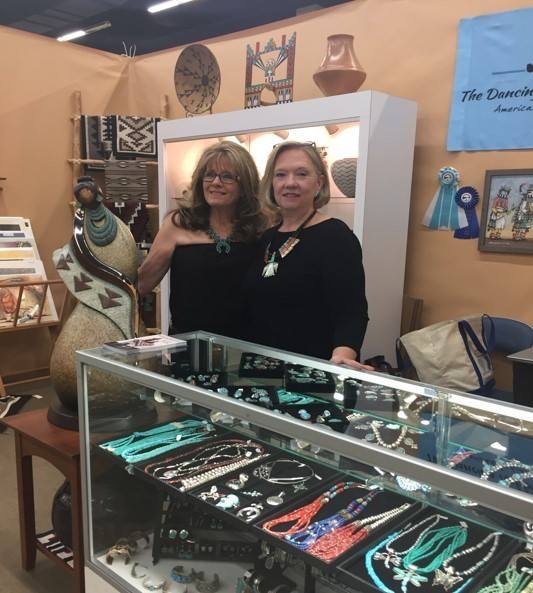 With apologies to Willie Nelson, whenever I think about taking a portion of The Dancing Rabbit Gallery to a show, I can’t help humming “On The Road Again.” After all, it is exciting for us to be able to capture a part of the cloud in which we live and bring it to a physical location.

Earlier this year, The Dancing Rabbit Gallery had a two-month long exhibition at the Lancaster Art Center in Grapevine, Texas. We had a few dozen pieces of original fine art and a large display case of jewelry, pottery, Zuni fetishes, and even four Navajo rugs. At the end of the exhibition, we agreed that it was quite successful. But there is nothing better than taking the Rabbit on the road and meeting new people.

For the last few years, we have also participated in Brian Lebel’s Old West show, where different gallery owners and vendors put up their booths and sell their wares. It is about two-thirds cowboy stuff, and about one-third Native American stuff. The Dancing Rabbit Gallery is proud to represent the latter category.

For several years, the show was held in the Fort Worth Coliseum, only twenty or so miles from our home. It made carting everything down there and setting up quite a bit easier, and we enjoyed the closeness of the event. Last year, however, Brian decided to move the show to Santa Fe, so we were faced with the challenge of seeing how much we could stuff into an extended length SUV and still represent the essence of a high quality gallery.

We took a seven foot tall kiva ladder, and hung a number of rugs on it. We took a large Taos ceremonial dance drum, and a 70 pound bronze sculpture by Kim Obrzut. Dozens of pots, quite a few pieces of jewelry, several dozen Zuni fetishes, and more. We really wanted to give Santa Fe and its visitors a taste of what a gallery that lives in the cloud is like.

And what we discovered, to our pleasure, is that a lot of people had already heard of us when they arrived at the show. Several even remarked that they were seeking us out to say hello and put a face to the name. There were others that we had met at the Heard Indian Market, or SWAIA’s Indian Market, or Winter Market, or several of the other shows where we go to visit with our Native American artist friends and their families.

But it is a different dynamic being on the other side of the counter, selling instead of buying. We take great pride in representing our Native American artists and showcasing their amazing talents, and this gives us a chance to tell stories about the artists and put a piece of Native American culture into the hands of our buyers.

That is why we have a website that looks like it does. One third is about product, one third is about the artists and their cultures, and one third is additional informational resources and our blogs about interesting people, places, and events taking place in the American Southwest.

So if you are in Santa Fe on June 22 and 23, please stop by the Santa Fe Convention Center and drop by our booth, number 306. We would really like to say hello, and maybe tell you a story or two.