The Zuni Pueblo is somewhere you must want to go in order to get to it.  The Interstate thunders by about forty miles north, and the only main ways to get to the Zuni Pueblo are driving south from Gallup or taking the Highway 53 shortcut if you are coming from Albuquerque.  Located in the southwest corner of New Mexico, the Zuni Pueblo is remote. 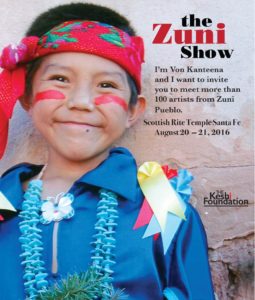 Fortunately, access to the wonderful art produced at the Zuni Pueblo is easier than ever.  In addition to the annual Main Street Festival held at Zuni Pueblo, there is a highly reputable retail outlet known as Keshi, The Zuni Connection in Santa Fe with a significant amount of Zuni art available.  The Museum of Northern Arizona in Flagstaff hosts an annual Zuni weekend each May, and artists are exhibiting at various shows around the United States.  Many are attempting to use social media and websites for their work, but sometimes sporadic Internet connections and other conditions make this problematic.

Now, The Zuni Show is making its inaugural entrance in conjunction with Santa Fe’s Indian Market on the third weekend of August.  It will be held on Saturday, August 20 and Sunday, August 21 at the Scottish Rite Temple, just north of the Square and in conjunction with Indian Market that weekend.  Coordinated by Robin Dunlap and Bronwyn Fox of the Zuni Foundation, (the same folks who set up the amazing Keshi, The Zuni Connection store in Santa Fe), this show promises to be a tremendous annual event.

In addition to over 100 Zuni artists at the show, there will be six Native American dance groups performing and a Daniel Pedro fashion show.  Pottery experts Bobby Silas and Tim Edaakie will be giving a demonstration of their incredibly exacting and authentic recreations of Anasazi and Puebloan pottery designs, and there will be many other activities for all ages.

In the arts, the Zuni people are known for elegant and precise silversmith work, high quality pottery, religious katsinam, and fetish carving.  They extend their talents into weaving and painting as well.  At the show, over 54 fetish carvers (of a total Zuni carver population estimated at over 500 carvers), 26 jewelers, 11 potters, 8 painters, 3 katsina/wood carvers, and one weaver are expected to exhibit.  This is a tremendous number of highly talented artists all from the small Zuni Pueblo.

You can learn more at thezunishow.org/ or thekeshifoundation.org – both wonderful websites to visit.

The Zuni learned silversmith work from the Spanish back in the 17th century, and have taken it to a new level with artistry and precision.  They are known for petit-point and needle-point turquoise cabochons adorning their work, and each piece is carefully hand-shaped to be identical to the others.  This is one way to distinguish Zuni silversmith from Navajo, who often use irregularly shaped stones on their jewelry.

The pottery is traditionally made, with the potters painstakingly acquiring the clay from the hills around the Zuni Pueblo, and carefully forming their pots before applying locally sourced vegetal dyes before firing.  Though some potters use electric kilns to fire the pottery, the construction and painting are still done in the traditional way, and most potters fight the vagaries of the weather with their traditional outside pottery firing as well.

Fetishes, or small stones that resemble certain animals and contain some of the essential spirit of that animal, are an amazing way to connect with the Zuni culture.  Originally, the stones were found in nature and carried in pouches or pockets to give the bearer some aspect of the figure.  For example, the eagle is a protector, and the corn maiden is a symbol of fertility and rich crops.  The stones might have an offering bundle affixed, and prayers might be said to release the spirit in the stone to aid the bearer.

Over the past few decades, carvers have become adept at taking different materials, such as stone, antler, shell, and even wood and fashioning more recognizable animal figures from them.  These are primarily meant for the tourist trade.  Some carvers have developed substantial skill in carving these materials, giving expression, detail, and even the illusion of motion to their creations.  As a result, highly skilled carvers can command hundreds and even thousands of dollars for their work.

Size has also become less of a limitation, as some carvers have moved beyond simple pouch or pocket size carvings to larger sculptural pieces.  Many carvers include inlay for specific details, such as eyes.

The katsinam, small wood dolls carved into specific configurations and carefully decorated, are typically used in religious ceremonies, and also used for storytelling, and are distinctly different than those made for tourist sale purposes.  Because of the religious emphasis on katsinam, a high level of respect and sensitivity should be shown.

Unlike the other Pueblo peoples, who speak Tewa, Towa, Tiwa, or Keres languages, the Zuni language is unique to the Zuni Pueblo and can be traced back over 7.000 years.  It is thought by some that this language has its ancient roots in the Aztec culture.  Over the years, the Zuni people have adapted to the land and their culture is much embedded in the spirits and traditions of the area.

The Zuni Pueblo lands are arid and sparse, lightly watered by a branch of the Little Colorado River.  Yet the Zuni people have lived here for thousands of years, ranching and farming the land.  It is estimated that there are somewhere around 12,000 people living on Zuni lands.  The current main Pueblo of Zuni was developed over a thousand years ago, and together with the Taos Pueblo are the oldest continually occupied dwellings in North America.

This old Native American culture is carefully expressed in the art of the silversmiths, potters, and carvers of the Zuni Pueblo.  As you learn more of this amazing Pueblo and its wonderful people, you can’t help but fall in love with the art that they produce and the stories that the art contains.