One of the most relaxing things I can do is make pottery.  I go out to my little studio, put some clay on the wheel, and listen carefully to what the clay tells me it wants to become.  Sometimes, I get into an almost catatonic zone, blocking everything out except the feel of the clay between my fingers as I move it upward toward its ultimate shape.  On other days, I try to make something and the clay fights back, telling me it doesn’t want to be that shape.  So I have learned to just let it flow, and work in harmony with the clay.  Often, what I end up with is a surprise to me, but if that is what the clay wants to be, then so be it. 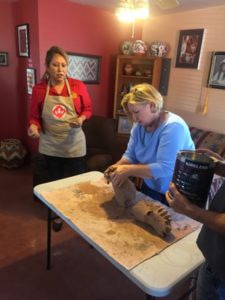 I’ve had this type of discussion with many of my Native American artist friends.  Just as my creativity comes from my background and experiences, so does theirs.  Their creativity is shaped by their culture, telling stories of the important images, values, and interactions with Mother Earth that are at the heart of Native American life.

Of all the media, pottery is the one with which I most identify.  But my approach is far simpler. Although I am learning to make clay, I usually buy boxes of clay, packaged glazes, and I use a wheel and a kiln to craft my pottery.  Native Americans, using the traditional methods of a thousand or more years, go into the hills and dig out clay from secret family sites.  They clean and grind the clay into a fine powder, then mixing with temper and water, kneading it into a base clay.  When the clay is ready, they make long ropes of the clay and begin to coil from the bottom upward.  After a long time of carefully fashioning the pot, they let it dry and smooth it using river stones – some favorite ones handed down through generations of family potters.  The potters go out in the hills searching for specific plants like wild mustard, which they grind and filter into paints.  Typically using a yucca leaf chewed carefully into a paintbrush, the potters will painstakingly paint traditional designs on the pots.

But the potters aren’t yet done.  They wait for good weather and build a wood cage around the pots they are firing.  Sometimes they enclose the wood with animal dung, resulting in an oxygen reduction that turns the fired clay into a black finish.  And then they offer prayers to the spirits and begin the firing.

Making a pot in the traditional Native American way is a very time consuming, exhausting labor of love. And when the firing is completed, the artists carefully pull away the burned woods to see what blessings the spirits have given them.  If the artists are fortunate, the firing has resulted in a wonderful piece of art.  Unfortunately, the clay sometimes breaks during firing, reducing the pot to nothing more than a set of fired shards.

I know something of the feeling of seeing a broken pot come from a firing.  It has happened to me more than once. When a pot cracks in the kiln after twelve to fourteen hours of firing, it saddens me.  But with a dozen pots in the kiln, losing one to a crack is not nearly the disaster experienced by the Native American artist.  Where I may have a few hours invested in creating, glazing, and firing a pot, the Native American artist has many times that amount of hours.  So I understand and empathize, but I don’t suffer the degree of pain as that of my Native American friends when their hard work is ruined.

The next time you gently pick up a piece of Native American art, whether a pot, painting, carving, textile, or other similar piece of art, consider the many hours of labor that the art represents, and then try to imagine the story that the artist is trying to tell.  If you do that, I think you will gain a much greater appreciation of the amazing talents of our Native American artists and their monumental efforts to preserve and improve their traditional methods of artistry.