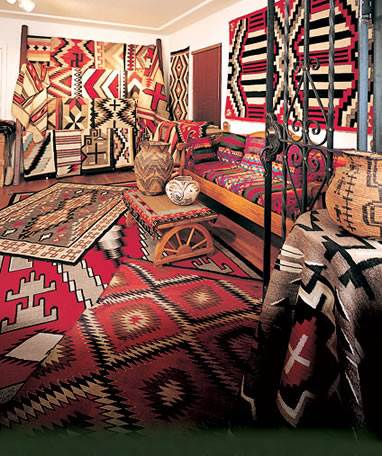 The New Mexico Chimayó style of weaving is characterized by two stripes running width-wise with a design, usually triangular, in the center. It is just one of the many styles of Rio Grande weaving developed over 400 hundred years ago by the people who settled in New Mexico bringing their churro sheep with them for food and wool. The settlers and the sheep thrived, enabling the communities to prosper and grow. By 1840 blankets were in great demand and were transported and traded out of New Mexico by the hundreds. Of course, many blankets stayed in New Mexico to ward off the cold of mountain nights. The need for warm weavings created a substantial industry employing sheepherders, spinners and weavers. Although there were a variety of woven goods produced as part of this trade, the single item in greatest demand was what came to be called the “Rio Grande Blanket” — a general term encompassing the entire weaving tradition of Hispanic New Mexico, centered at Chimayo.

Chimayo weaving is a tradition with deep roots, and the tradition continues today in the beautiful one-of-a kind garments woven in multi-generational workshops and generally consists of two stripes and a center design in the tradition of the Rio Grande Blanket. The stunning tapestries include those of award-winning artisans Irvin Trujillo of Centinela Traditional Arts, Robert Ortega of Ortega’s Weaving Shop, and Karen Martinez and Carlos Martinez, and many others. The weavers of the Chimayo tradition rely on local churro wool, whose undyed wools display a stunning variation of ecru, cream, brown and black. Many natural plant dyes are used to expand the color palette to include the desert hues of the New Mexico landscape and sky.

The work of these Chimayo, New Mexican weavers can be found in the collections of museums such as the Smithsonian, the American Museum of Natural History, the Albuquerque Museum, the Millicent Rogers Museum near Taos and the Museum of International Folk Art in Santa Fe.

Native American Navajo rugs and blankets are textiles produced by Navajo people of the Four Corners area of the United States. Navajo textiles are highly regarded and have been sought after as trade items for over 150 years. Commercial production of hand woven blankets and rugs has been an important element of the Navajo economy.

Adopting the vertical loom and native cotton yarns, Navajo weavers quickly established themselves as master craftsmen in the weaving arts. Once churro sheep were introduced in the 1500’s, Navajo weavers’ skill at transforming wool thread into high quality mantas (wearing blankets), dresses, shirts and sashes made their work desirable, not only among themselves, but by surrounding tribes such as the Pueblos, Apache, Arapahoe, Cheyenne, Sioux and Ute.

One unique characteristic about a Navajo rug is that the foundation warp thread turns back at the top and bottom continuously so the exact length of the rug is therefore predetermined. The weaver needs to have great skill for her design to be finished when she reaches end of the rug. In the entire world there are no other weavings made in such a way.

Non-regional, or general rugs, make up the largest category of Navajo rugs. The non-regional rugs do not exhibit unique characteristics that allow them to be pinpointed to a specific Chapter or trading post area. Many master weavers like to mix styles and experiment with dyes, color compositions and designs, adding their unique touch to rugs that may not be in the style of the area in which they live.

No matter whether the beautiful rug is from a specific area or a non-regional rug, these weavings exhibit a fourfold symmetry, which is thought to embody traditional ideas about harmony or Hozh.